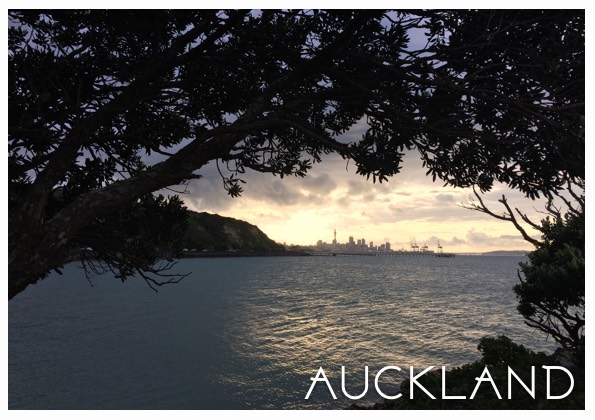 01 - From Oakland to Auckland

We hope you are all doing well.

We spent 2 great weeks in San Francisco, staying at Cyrille and Emilie's lovely place; it was awesome! We enjoyed a lot our time with them and the kids and notably the Gorilla's wild games, Friday pizza parties, the school clappings, the Halloween pumpkin market and the always beautiful view from Tank Hill.

We could see some friends again (and even friends from Europe that were on holidays there) and rediscover the city - mainly by bike, sometimes with public transportation but we quickly recalled why we tried to avoid them before.

A lot of new places appeared but fortunately some old places remained. As usual, we went back to Parada 22, the Puerto Rican restaurant close to our previous home. Their plantains are still delicious!

We discovered Rodeo beach and its nice black sand after a great bike ride via the Golden Gate bridge. 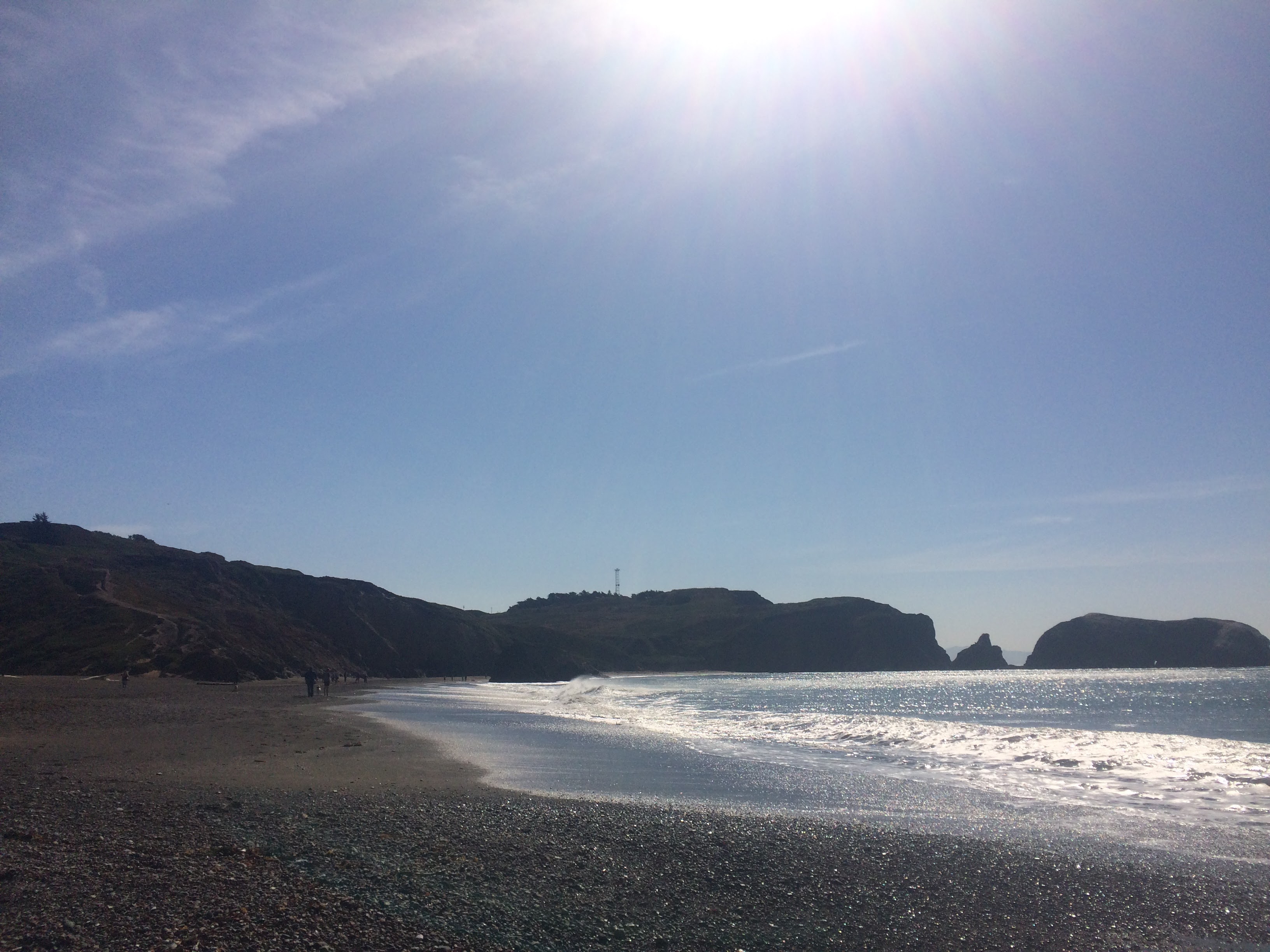 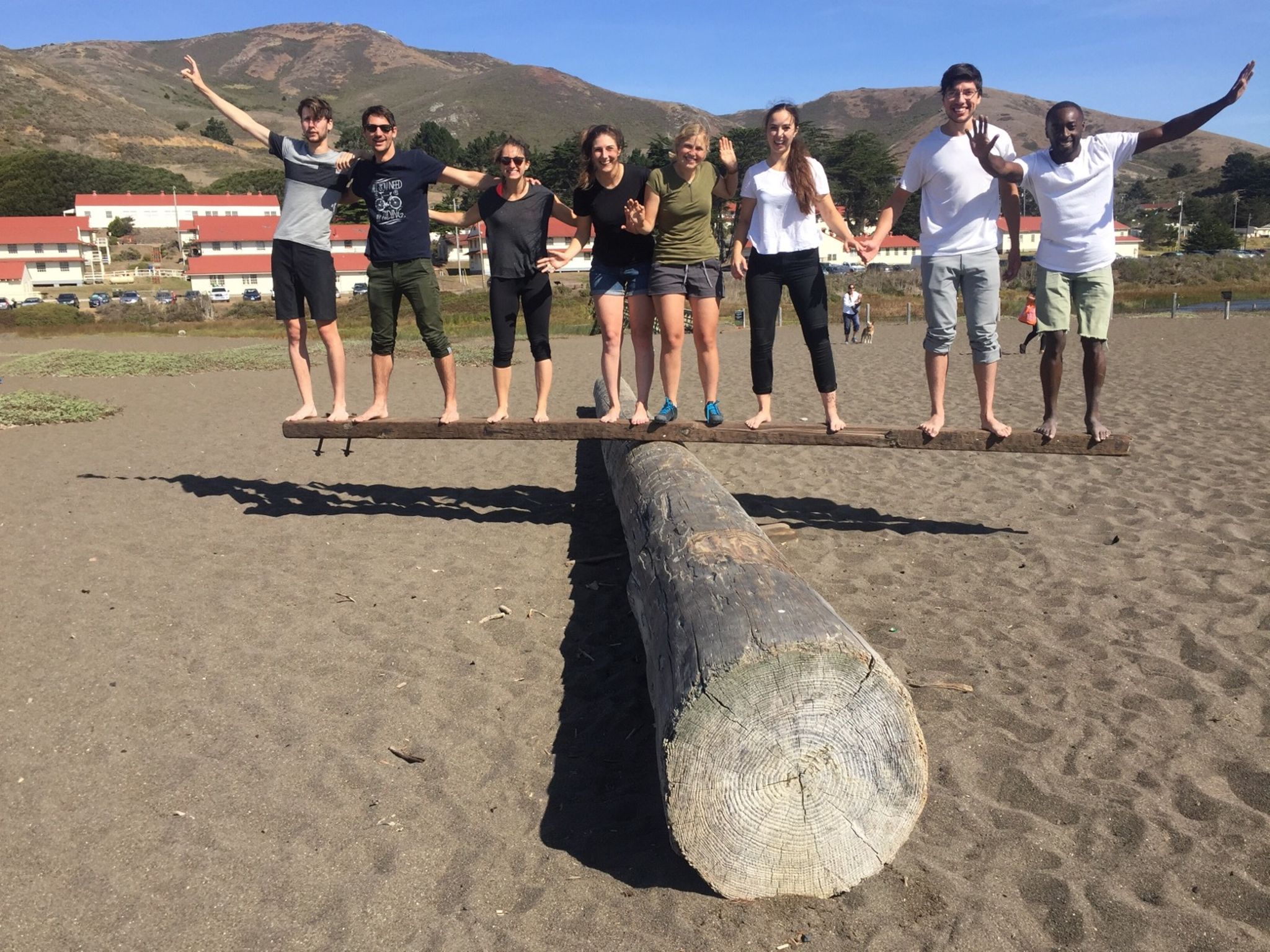 Time flew by very fast but we enjoyed every bit of our stay. 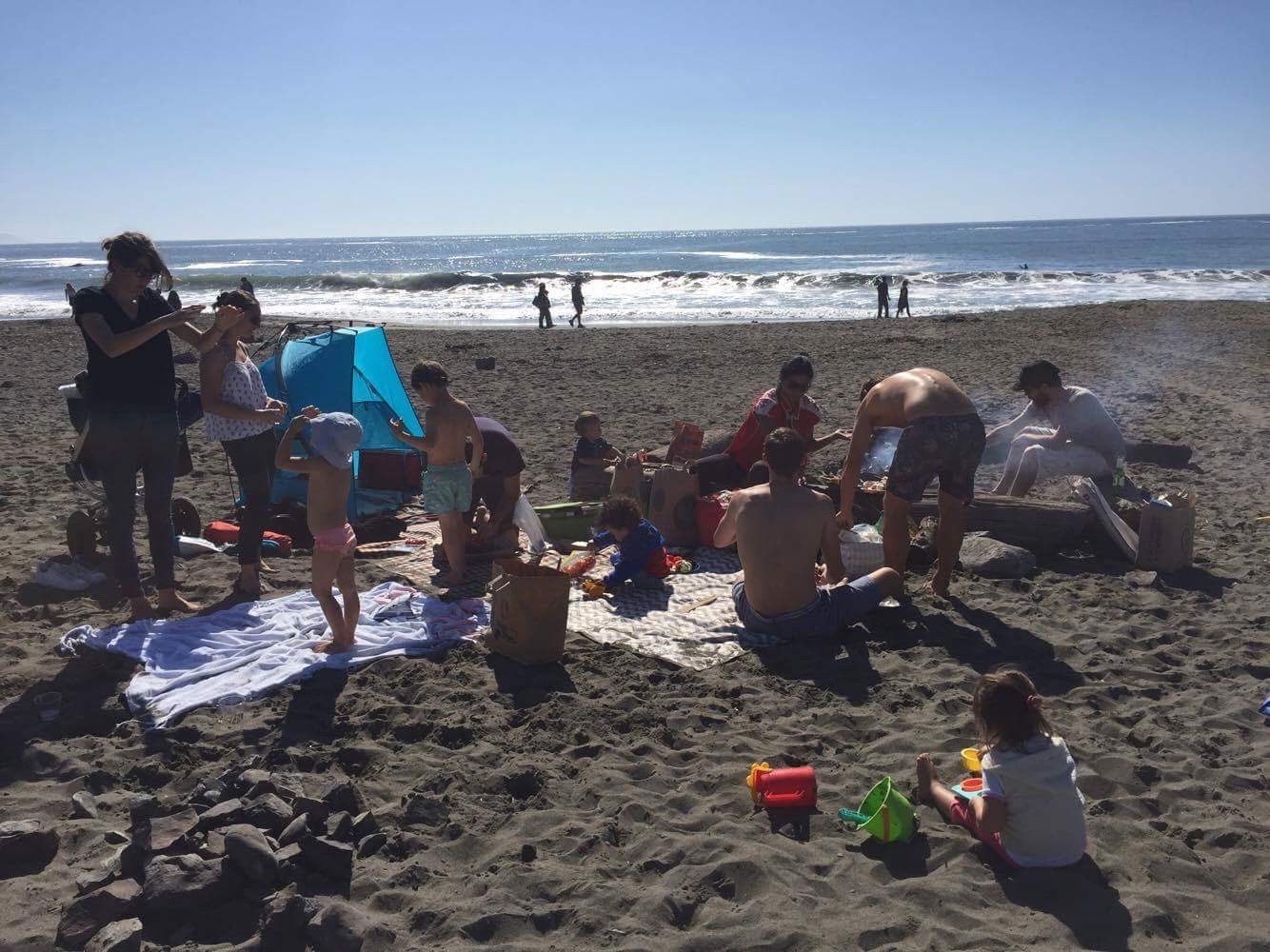 After San Francisco, destination Auckland, New Zealand. We did a quick stopover in Hawaii, just the time to visit the International terminal. 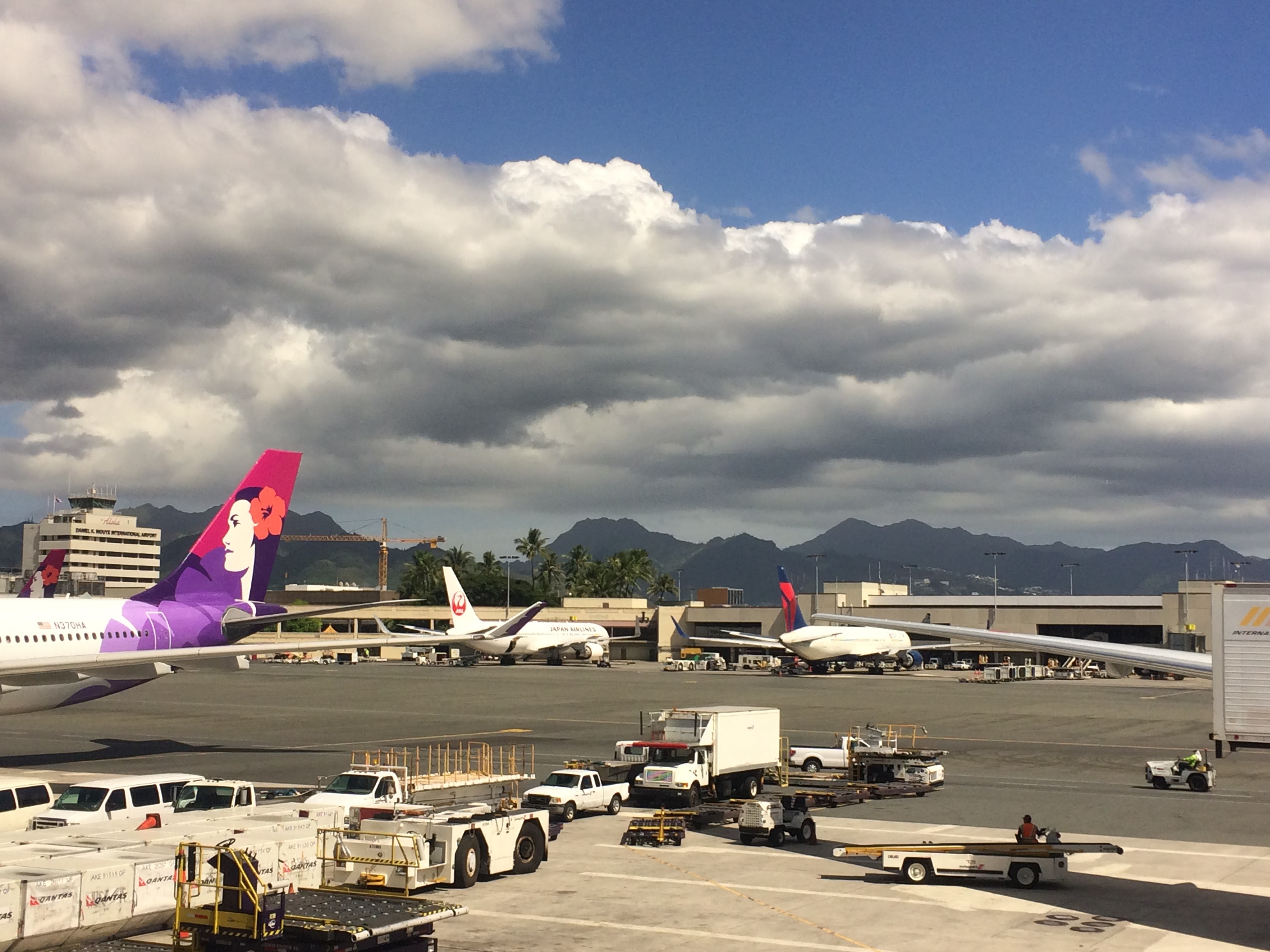 View from the International terminal

The first hours of our first flight seemed sooo long; we were far from the windows and there was no movie (and we left our books in our luggage). But then, after playing a bit with the screens, we found the trailers... and watched nearly all of them; it kept us busy until the end!

We left San Francisco on the 24th in the morning, spent the day in planes and arrived just before midnight on the 25th. We haven't seen October 25th this year ;)

After a short night at the Ibis Hotel close to the airport, we had a coffee at the reception and heard a well-known music... Moana! She is not leaving us since San Francisco. Then we went to Malcolm and Janey's home, our Airbnb hosts, in Mission Bay. We were welcomed by Malcolm and Joe, their adorable black dog.

During the afternoon, we visited downtown Auckland. Not bad. A few skyscrapers but not too many; all the neighborhoods seem to have their lives: one main street with restaurants, cafés, shops and secondary roads more residential. Overall, a lot of cars and not a lot of pedestrians. But all the people we met were very nice and always wanted to help. 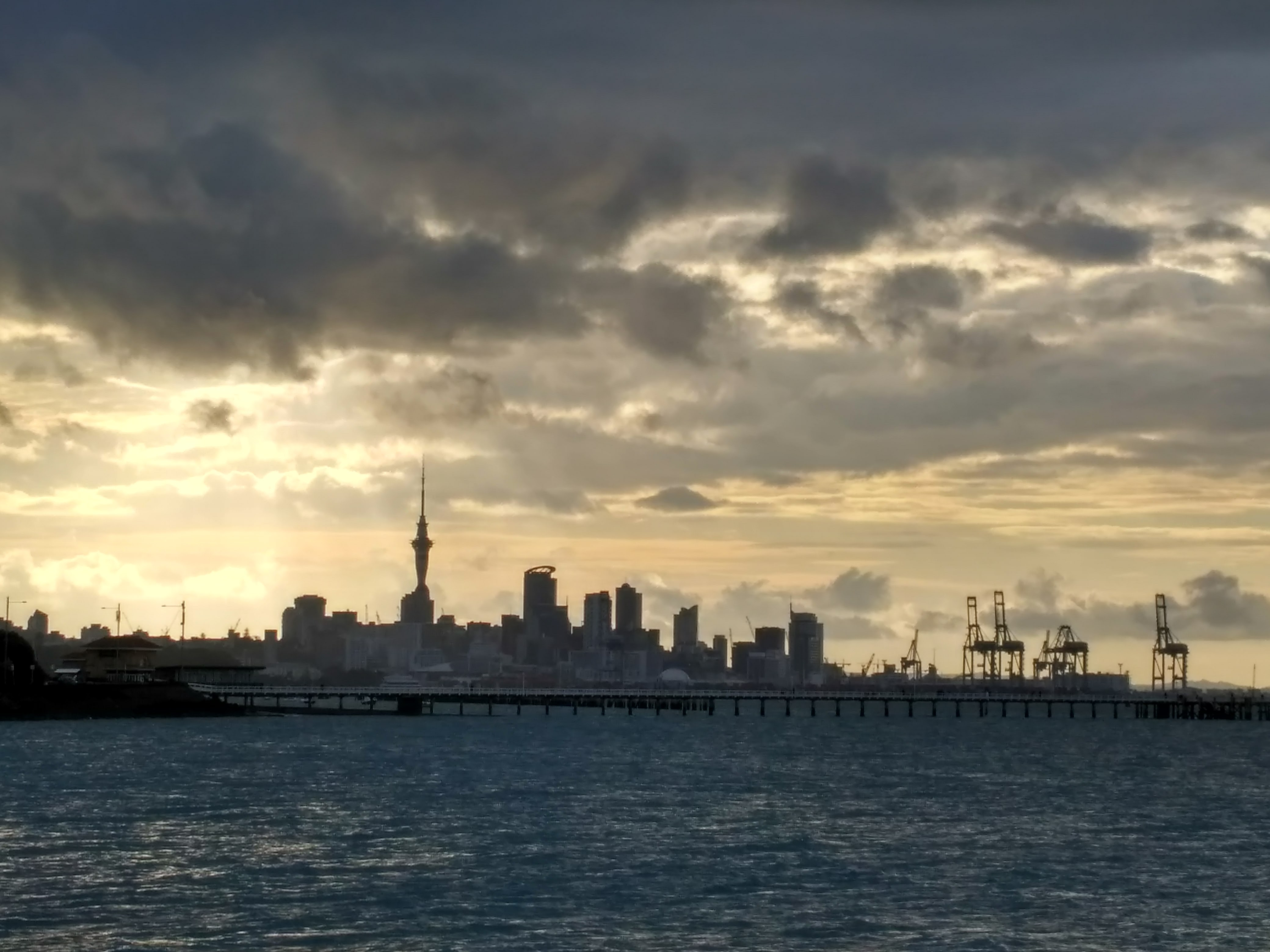 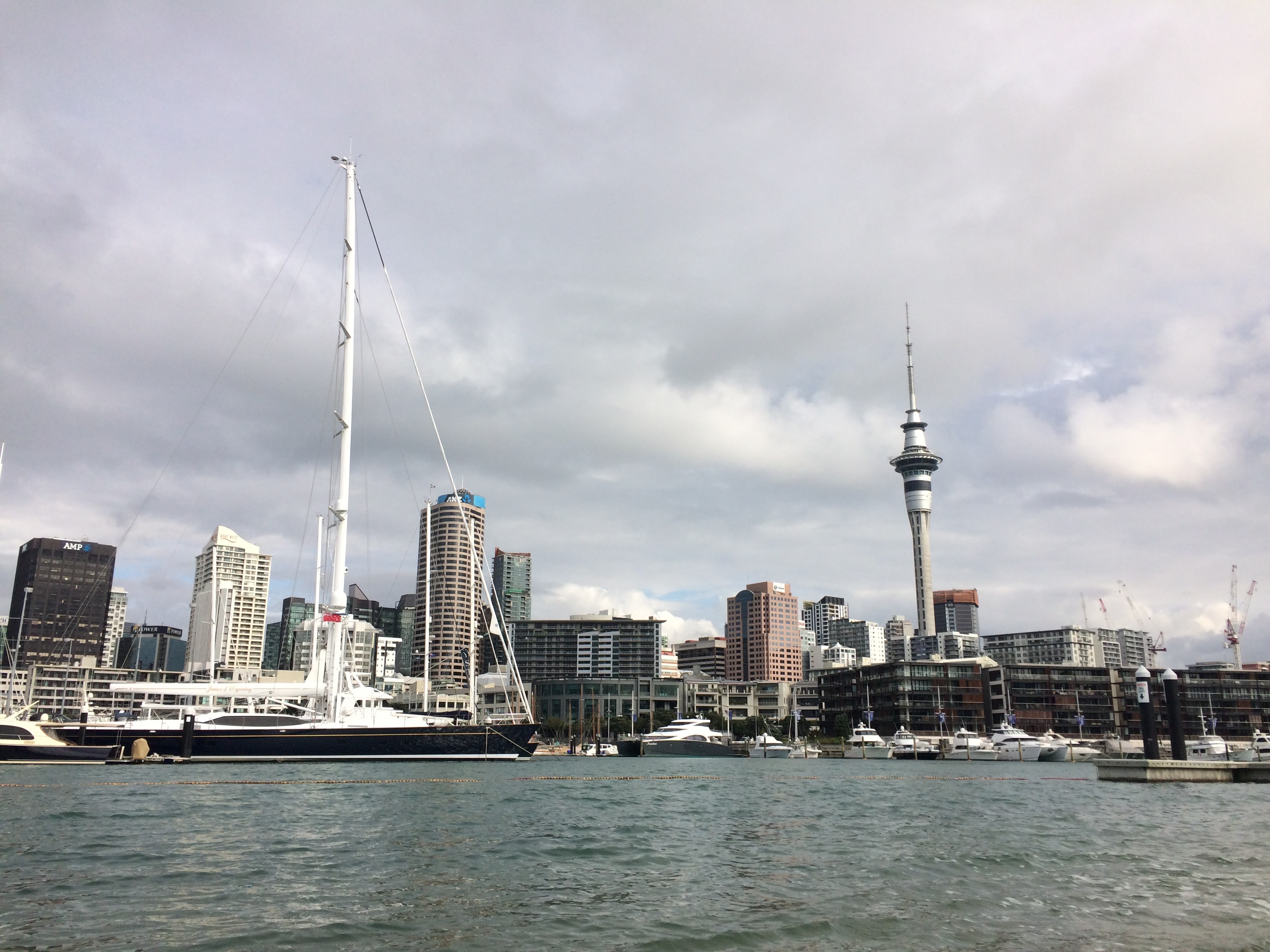 We spent a week in Auckland to take care of the paperwork needed and to find our 4-wheel travel companion.
The paperwork were done very quickly; we spent half an hour at the bank to open an account (never saw a banker typing that quickly on a keyboard) and only a few minutes were needed to have a new zealander phone number.
We had time to discover a little bit more the city, see some people bungee jumping from the Sky Tower, have a coffee close to the harbour and bike. Our bike ride to the Mount Eden was very nice! 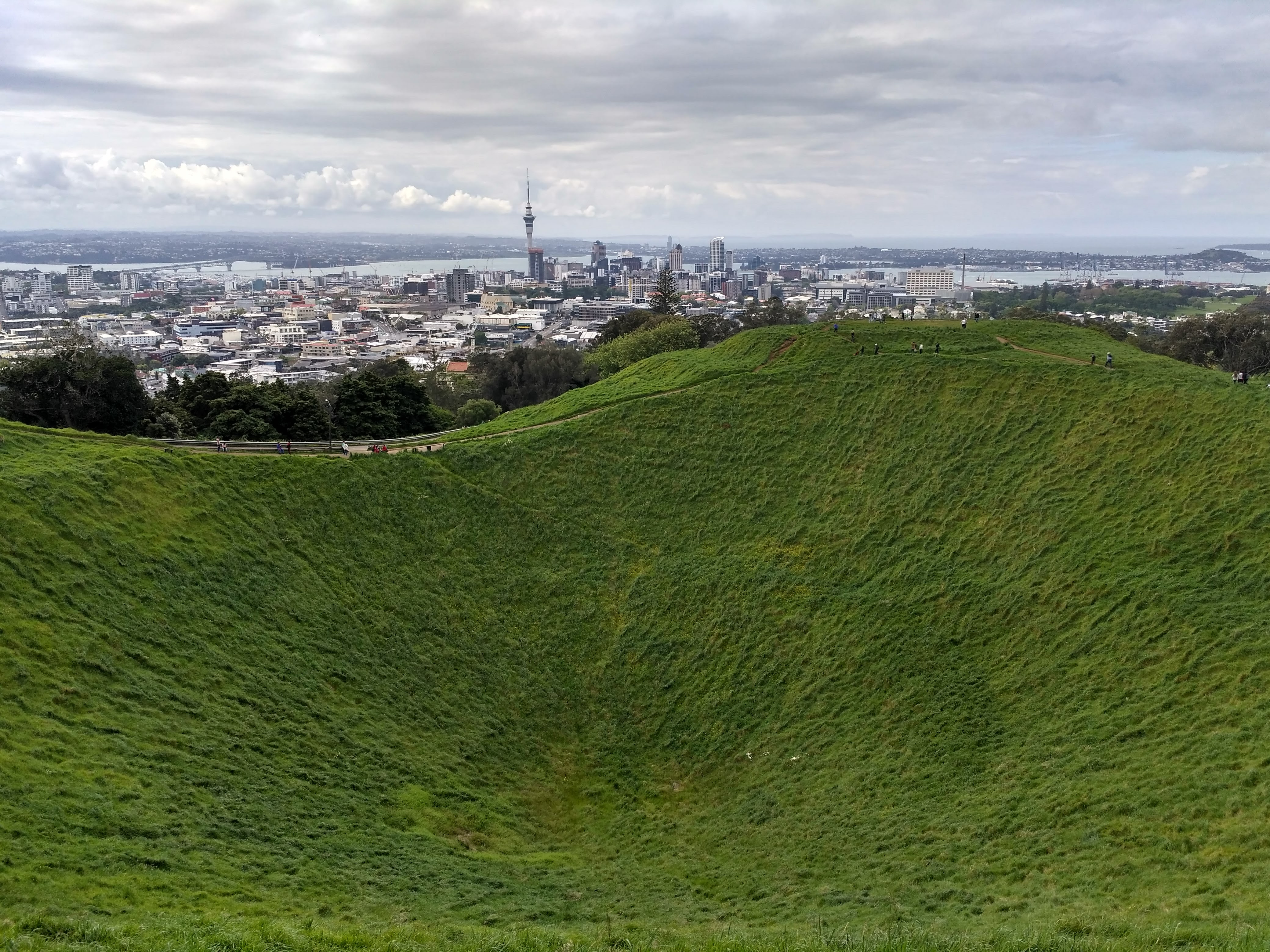 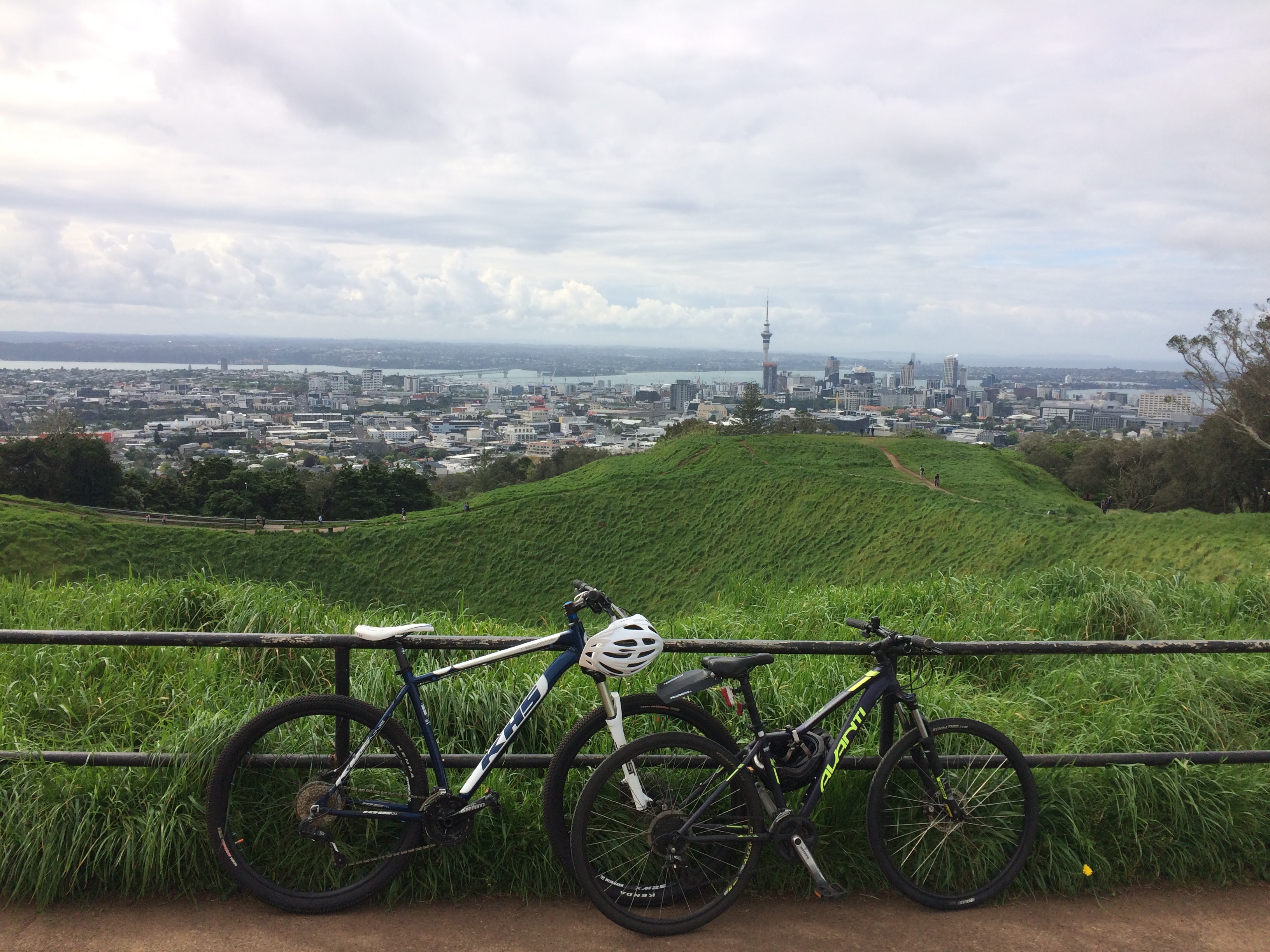 Mount Eden, the top of Auckland Live from the Sky Tower

We also went to a rugby League game, and saw New Zealand vs Samoa. Rugby League is a bit different than the usual rugby: there are 13 players on the field, the tries and penalties are scored differently and there is no scrum. But is was great, the atmosphere was amazing, we saw some hakas, heard traditional maori music and saw an RnB performance. 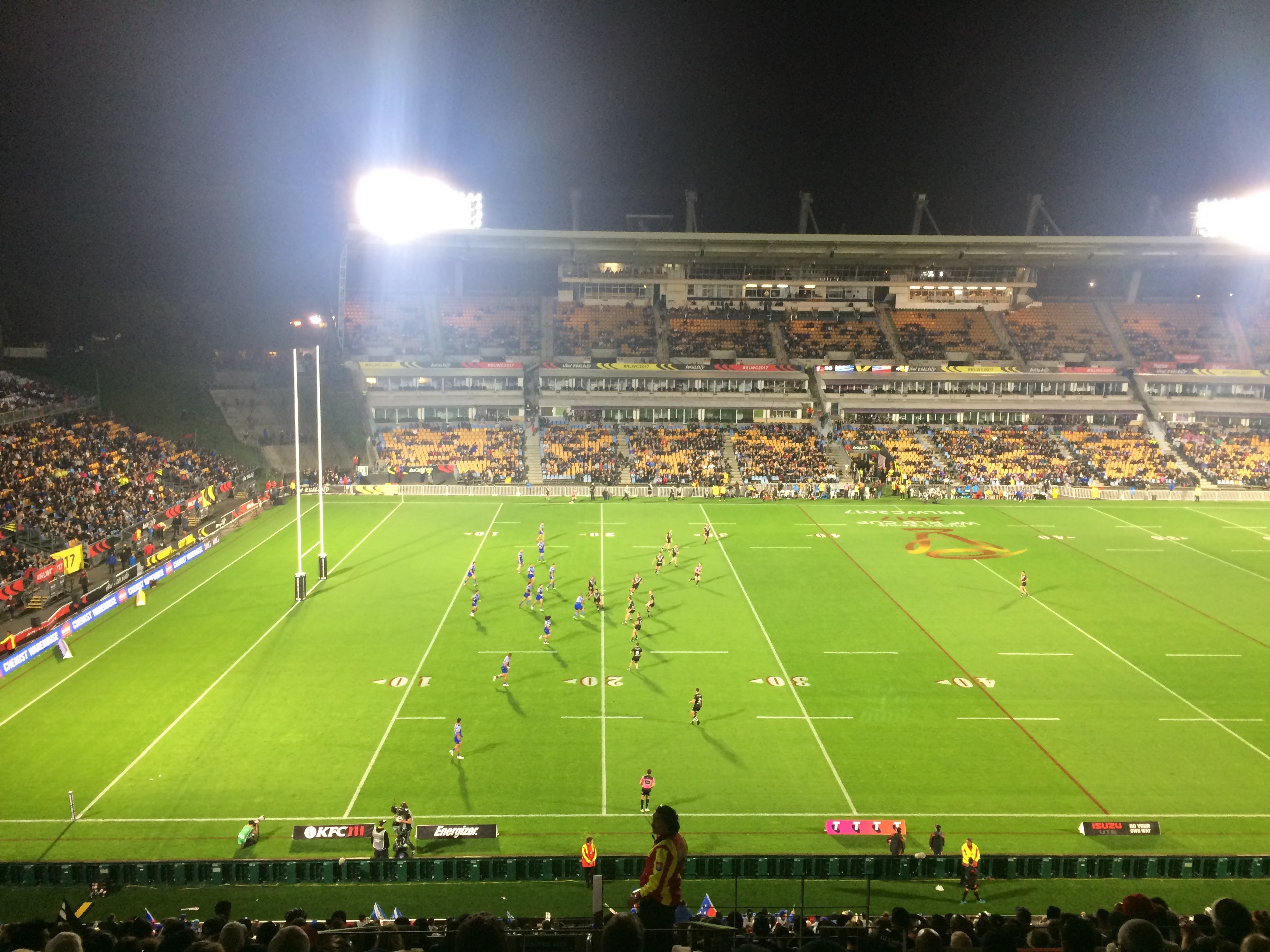 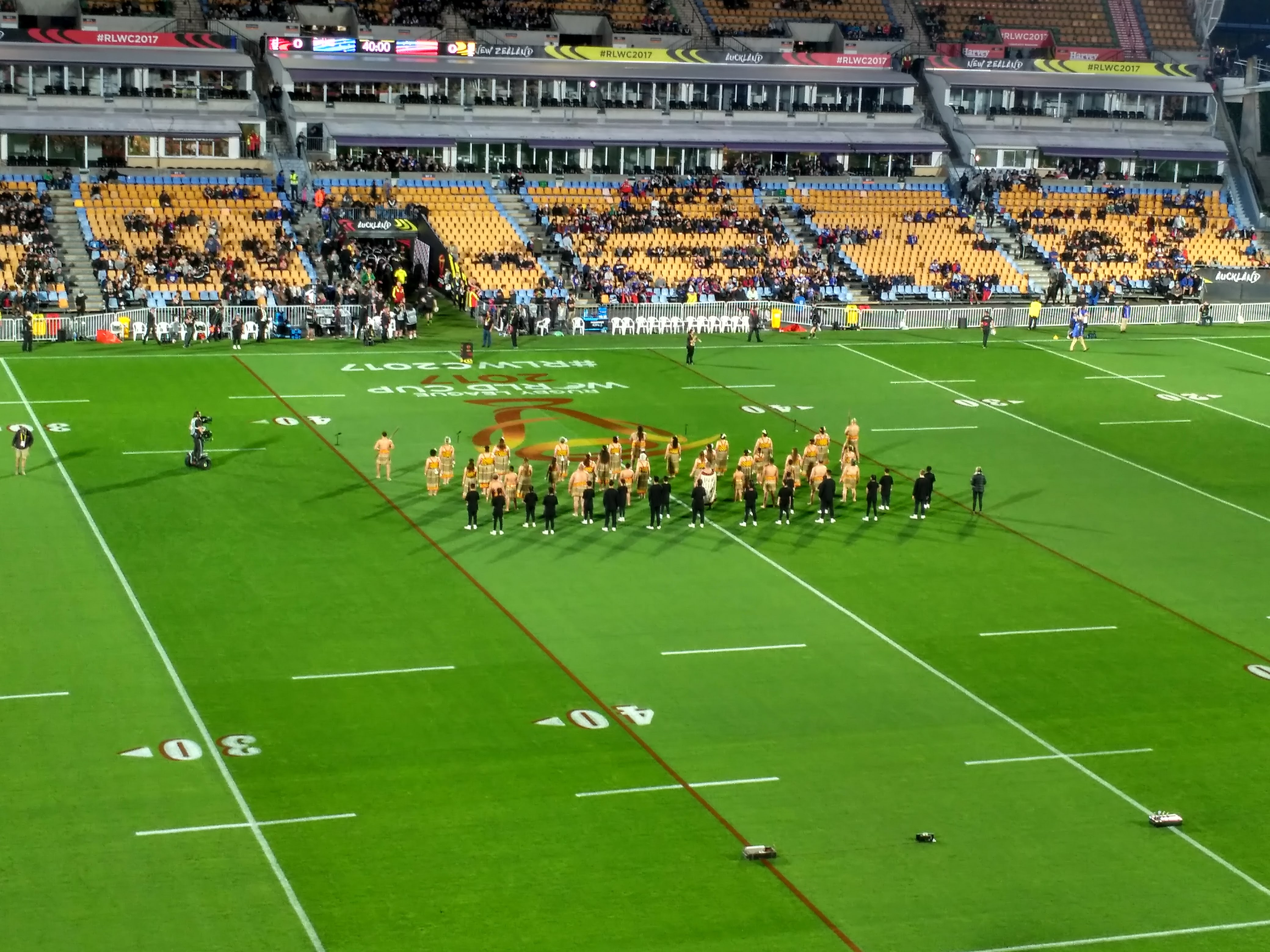 The campervan we bought is a 1996 Mitsubishi Delica. Not very young indeed but it knows all NZ roads! We bought it from a Singaporean who converted it to be able to sleep, cook and eat inside. 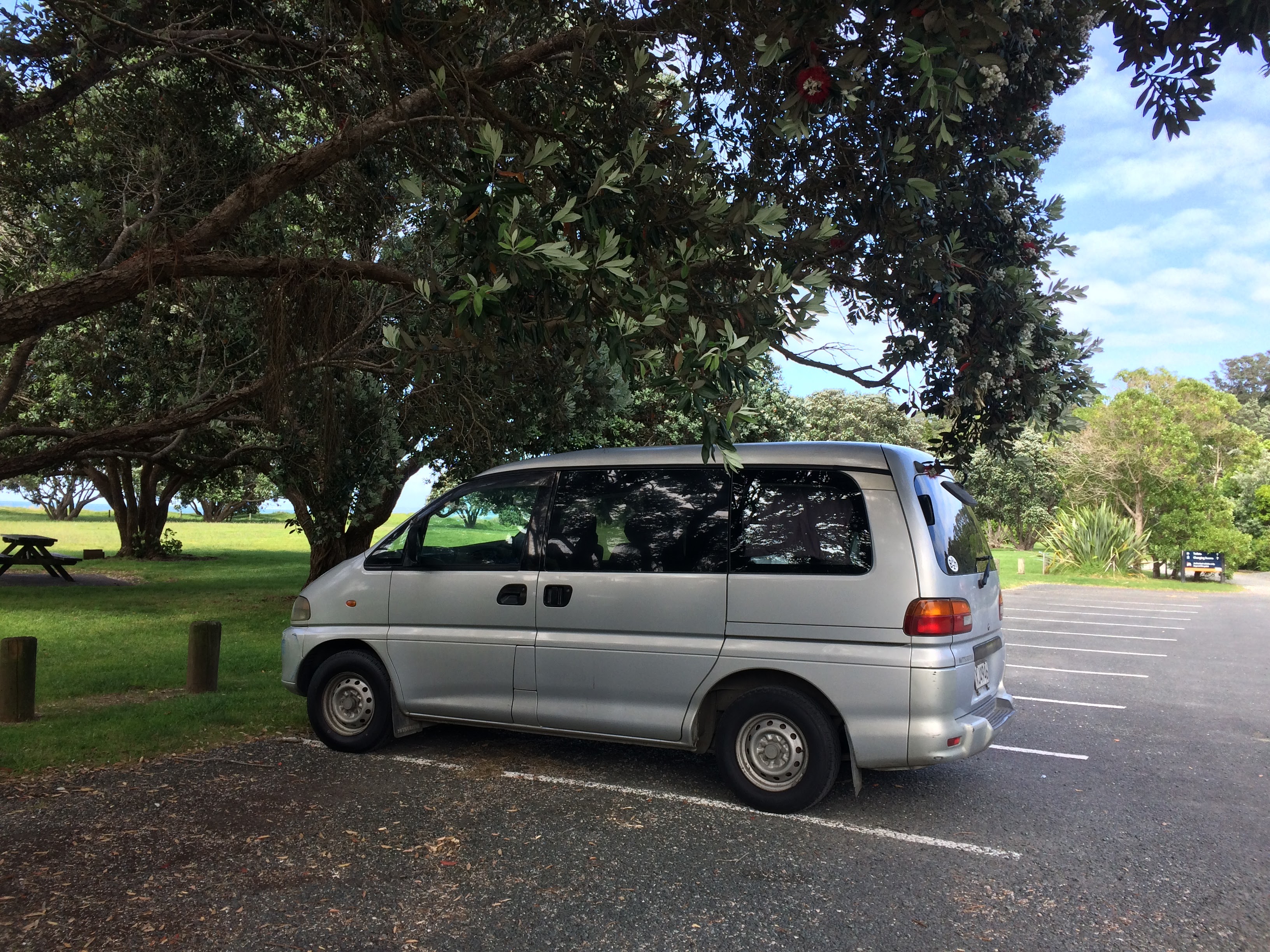 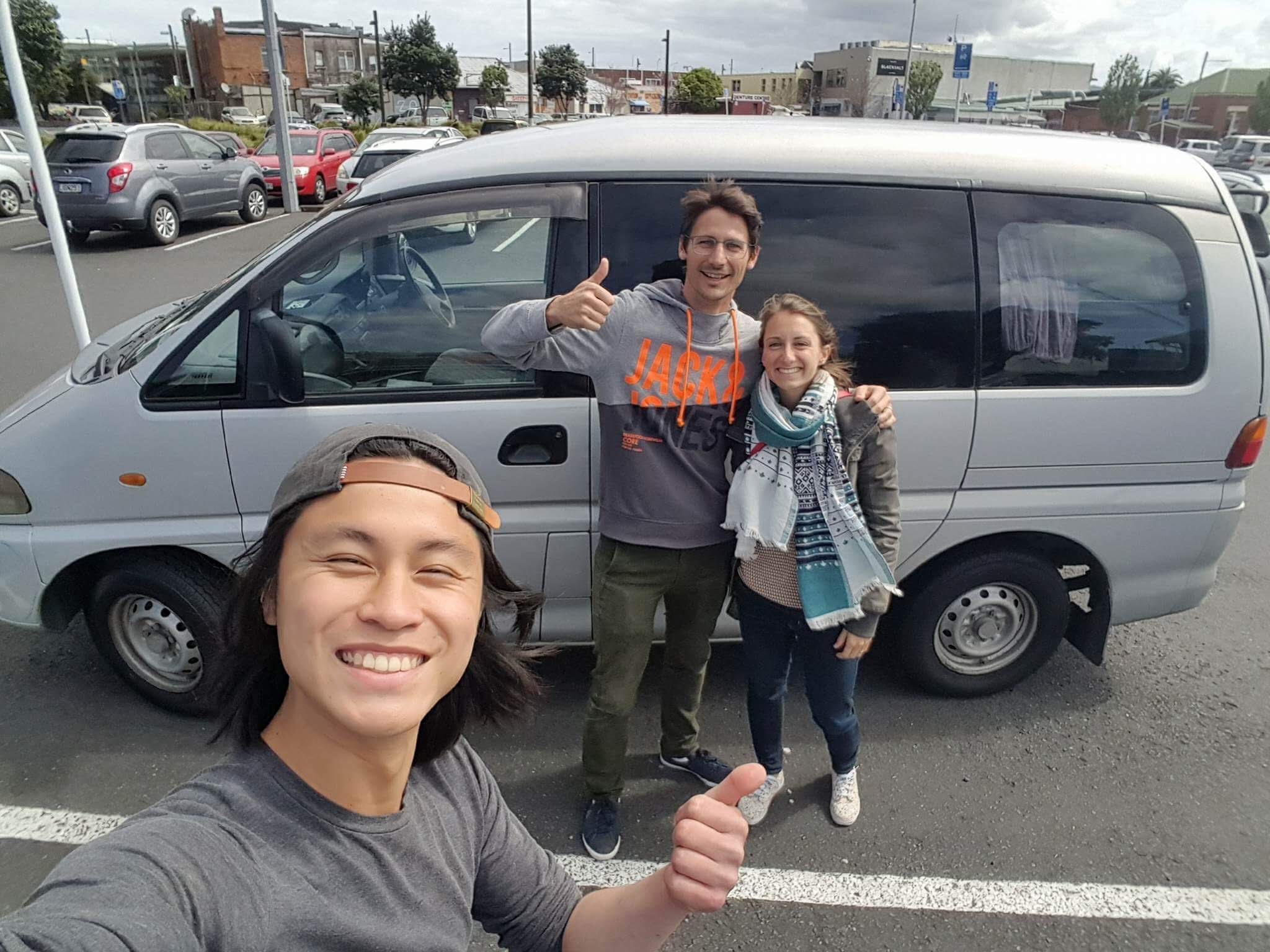 The change of ownership of the van was also very quick. So we are now going up north and are excited to discover more of the country!

See you soon! Lots of love,

Read our other cards 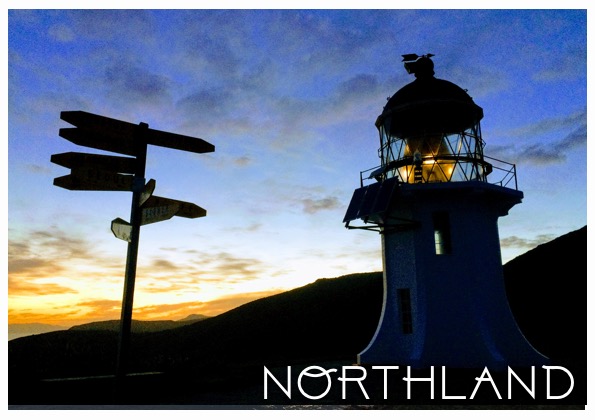