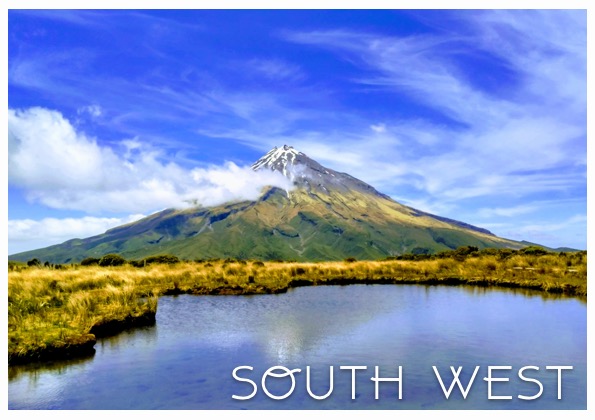 We hope your are all doing great and are having a wonderful end of the year.

On our side, this Christmas is a bit special. It's hot here and even if the shops try to spread a Christmassy feeling over the city, it doesn't feel like December. But it won't prevent us from celebrating! We are meeting some friends from high school, Pauline & Baptiste, to spend Christmas together.
Time went by very quickly and today, 2 months to the day of our arrival in NZ and 5500 kilometers covered, we are taking the ferry to go to the South Island.

Those last weeks were quite active. First, we met with Coraya, aka Guillaume, at Huka Falls. Even the best Whirlpool washing machines would be ashamed in front of those falls. We then enjoyed a nice bath in the hot springs close to the beautiful lake Taupo. We were 100 kilometers away from Rotorua but we could definitely feel (and smell) the power of the geothermy. 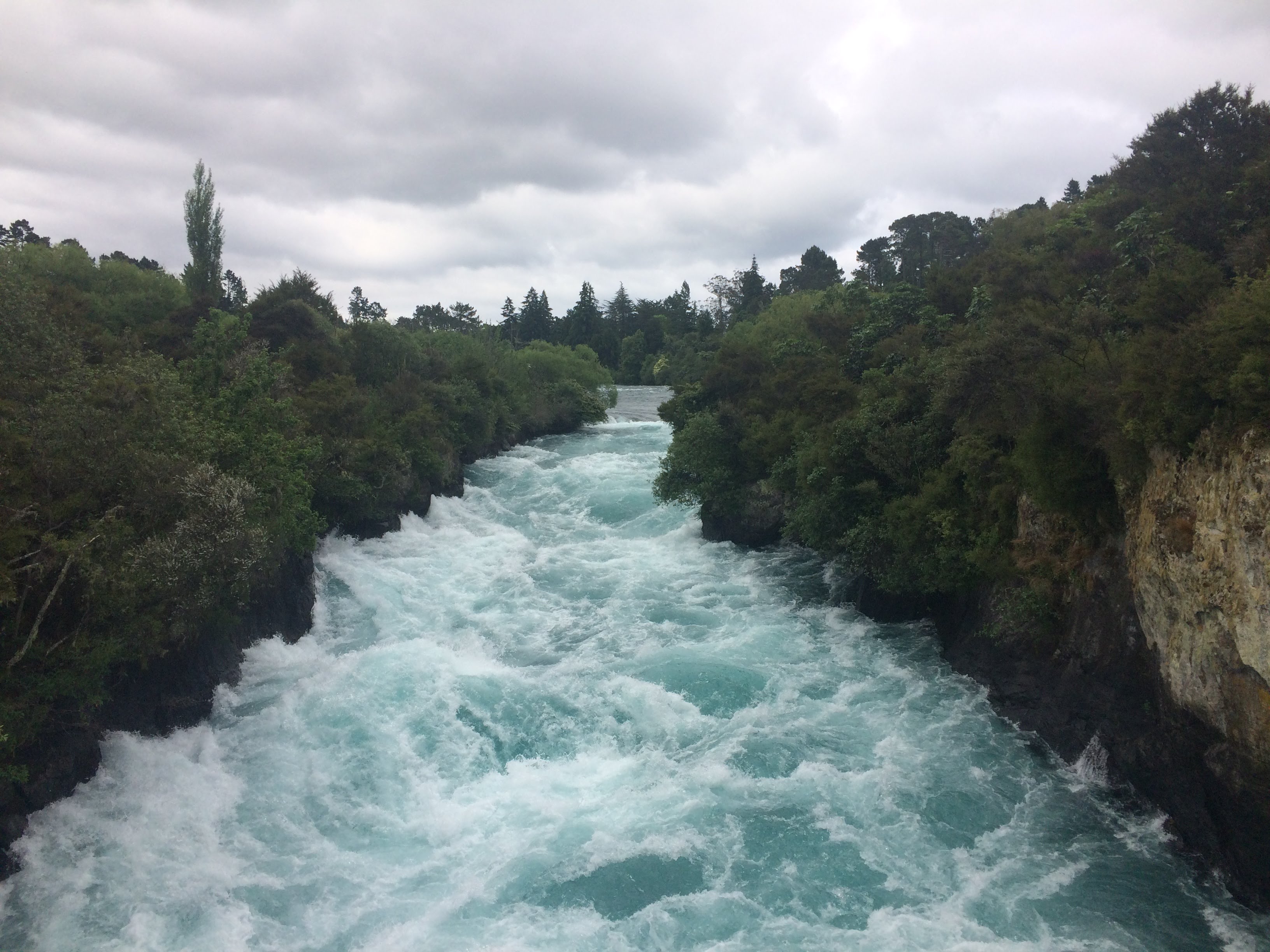 The adventure starts with Tongariro National Park and notably the Tongariro Alpine Crossing (you read it correctly: 'Alpine'). The park is composed of different volcanoes, more or less awaken. We were guaranteed a good elevation gain, some wind and a strong sun. We started the hike by the end and started early to avoid the crowd.
The day and views are incredible: volcanic rock hills, craters (the Mount Doom of the Lord of the Rings was totally clear and we could see the summit still covered in snow), amazing blue lakes. In the end, a 19-km hike plus 6 kilometers on a gravel road to get back to the main road. We appreciated a lot the campsite and the shower at the end of the day! 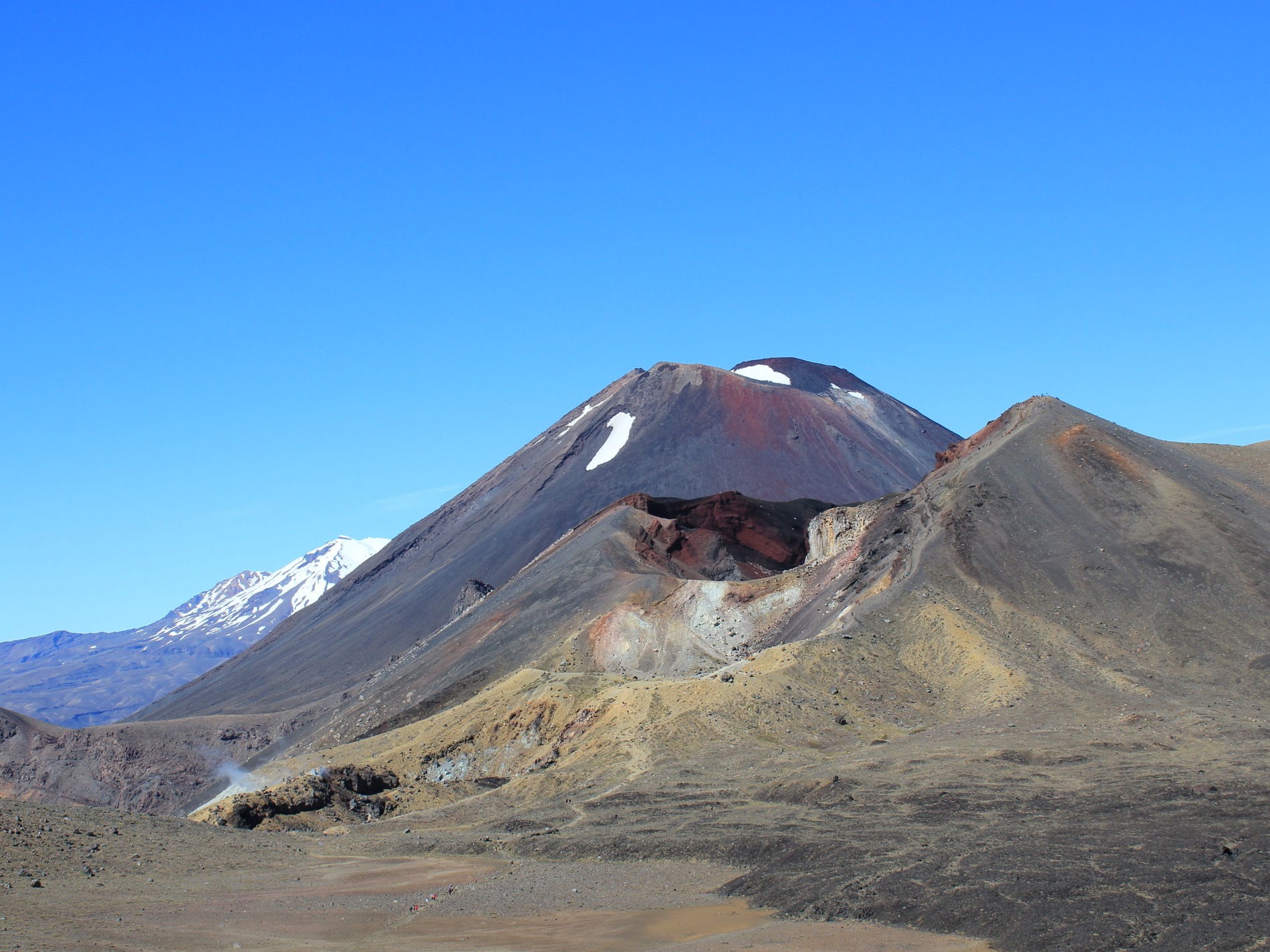 Mount Ngauruhoe and the red crater 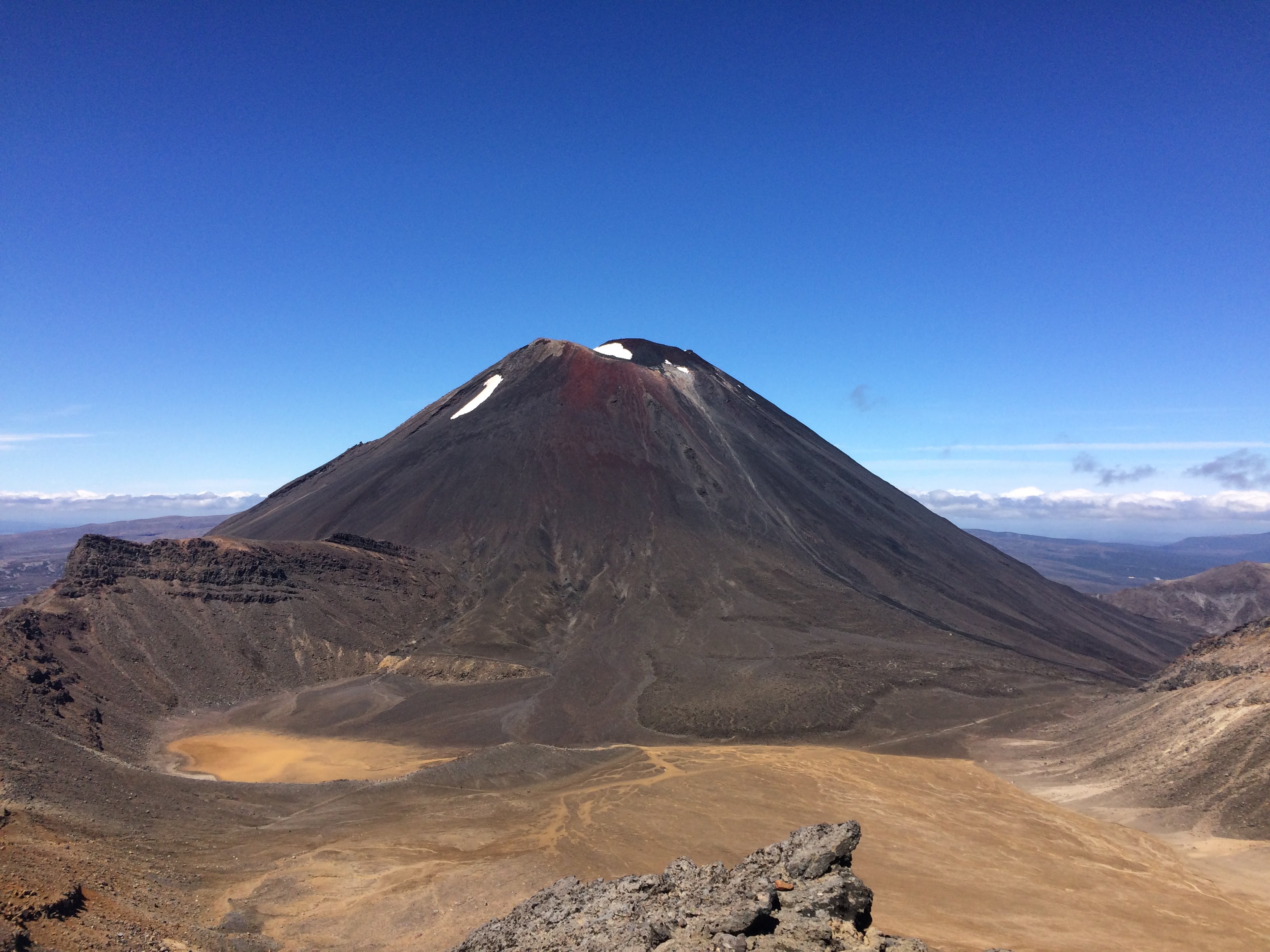 Mount Ngauruhoe aka Mount Doom in the Lord of the Rings

Baptiste & Coraya at the bottom of the volcano 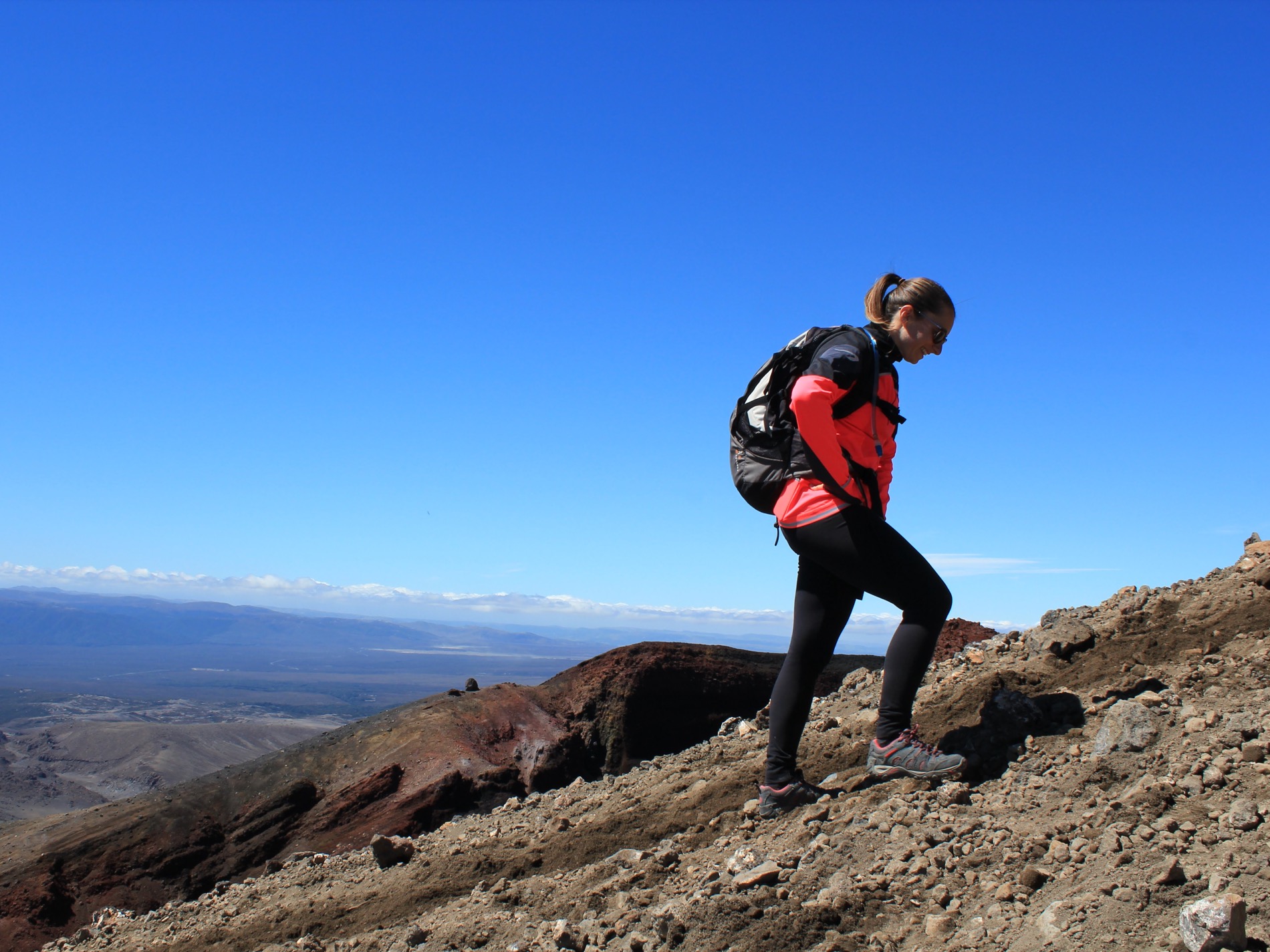 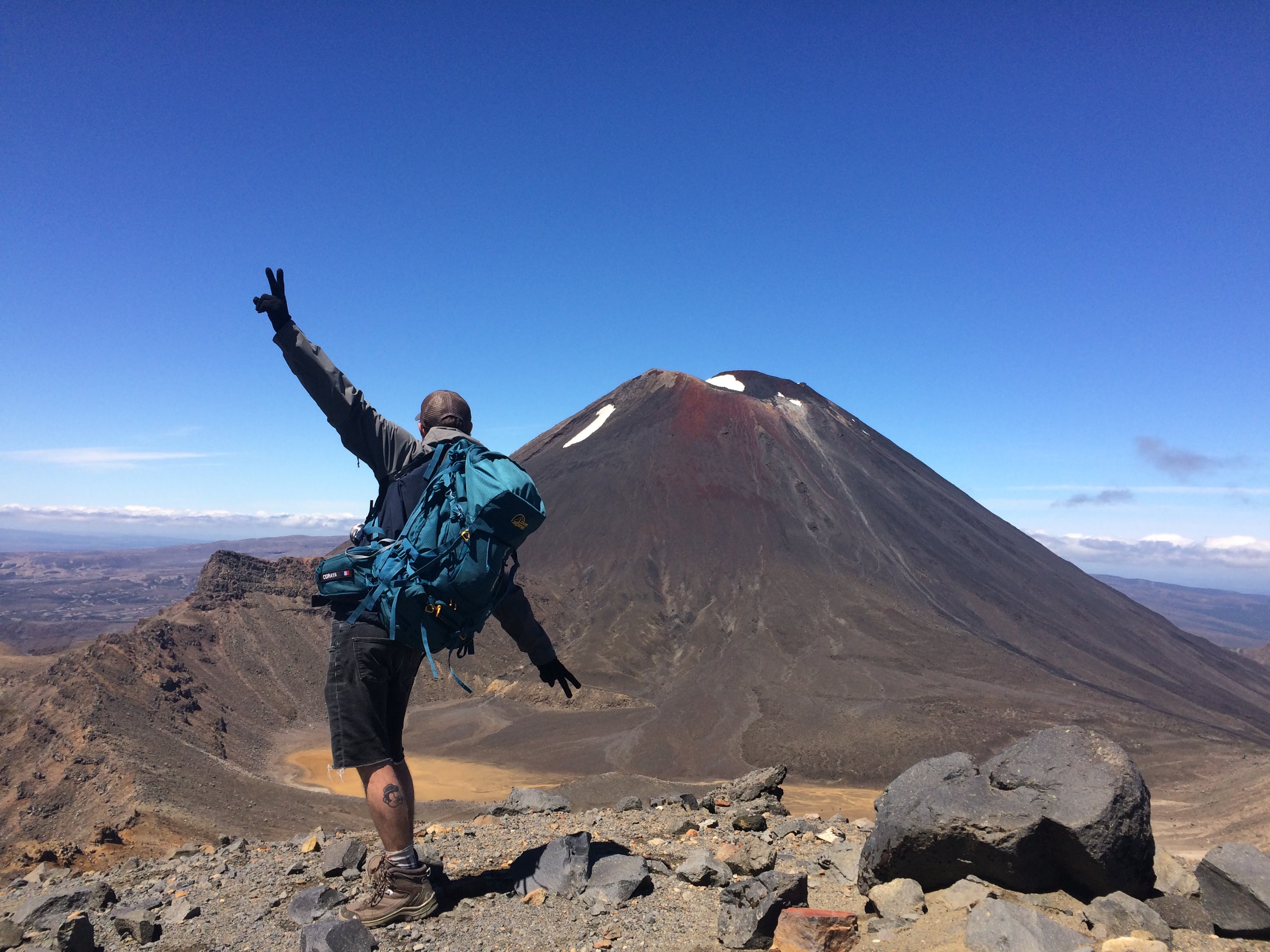 The following days were a bit more relax. As we say here, chillax! We spent some time in the campsite (to clean our clothes), in the library (to write to you) and in a glowworm cave (Léo's favourite bugs).

At the entrance of the cave 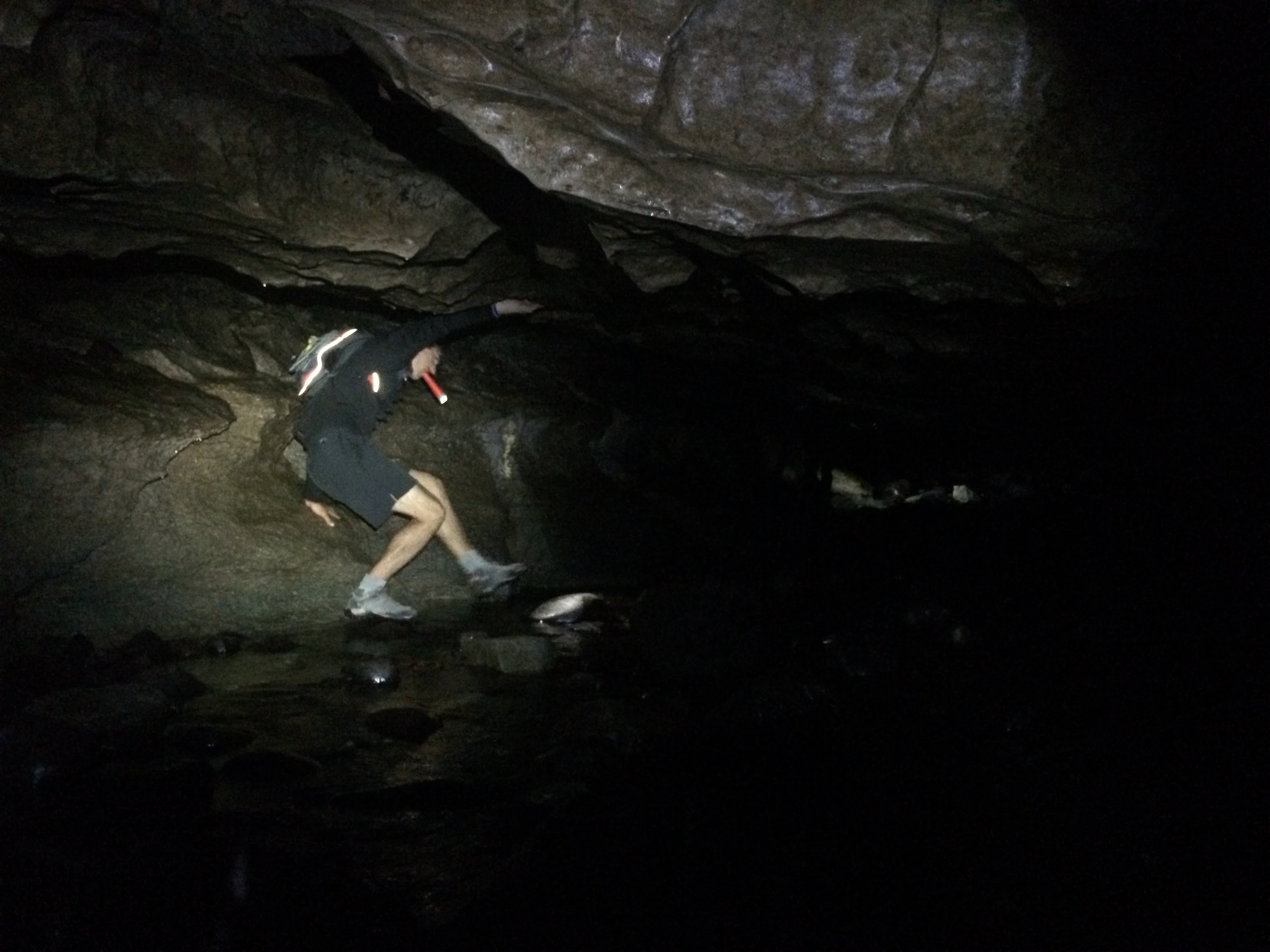 Glowworms and their sticky lines

Still with Coraya, we did a 3-day canoe journey on the Whanganui river. It's one of the 9 Great Walks of New Zealand but this one is on water.

Don't picture a nice canoe ride, going down a quiet river with a good current. Nope, we had to paddle hard to move and to pass the rapids without flipping over (we saw some guys upside down but not us!). As we were 3, we had a kayak for one person and a double canoe (a canadian canoe for the experts) which was great, so that we could swap "seats" in the boats. The kayak was easier to move than the canoe. The person sat at the back of the canoe does nearly all the work, giving implusion and direction and the person sat at the front paddles to give some speed. 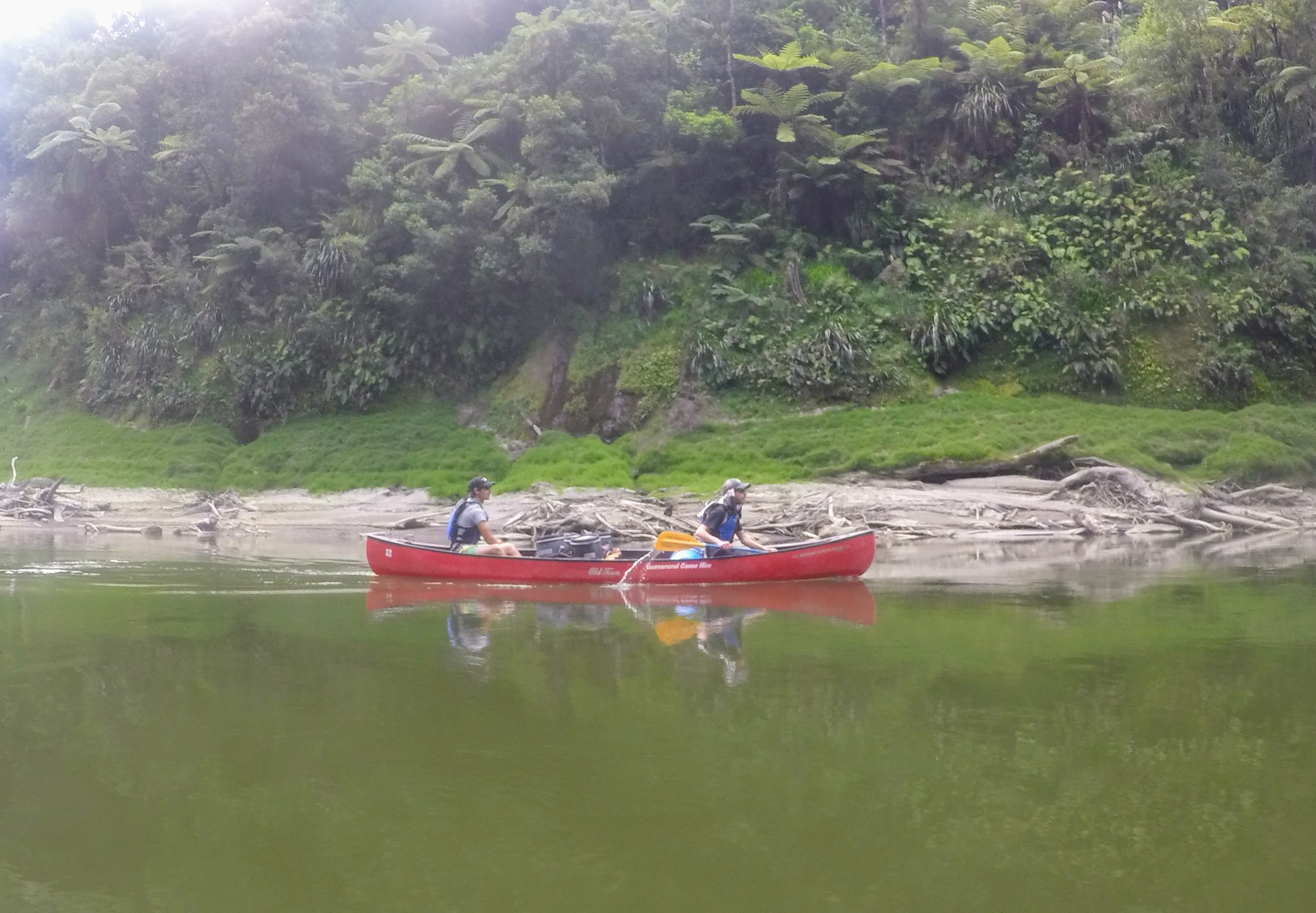 The adventurers on the New Zealander Amazone

The days went by very quickly: we secure the barrels that contain all our stuff, we paddle a lot, we try to fish, we swim and have fun in the rapids. During the evening, after a session of unlucky fishing (we reached the conclusion that there were no fish in this river), we put up the tent, cook dinner and play cards before tracking the possums! First encounters with these pests from New-Zealand who destroy a lot of things unfortunately. It's a mix between a rat and a cat - it's not as ugly as it sounds - that is active only when it's dark.

It's already time to say goodbye to Coraya who is heading to Napier and we are heading to New Plymouth.

The road we took is called the Forgotten World Highway and goes through very nice hills, tunnels and a special town: Whangamomona (this town declared itself a republic in 1989). At the end of the highway, closer to Stratford, we started to see the Mount Taranaki.

The hills of the Forgotten World Highway 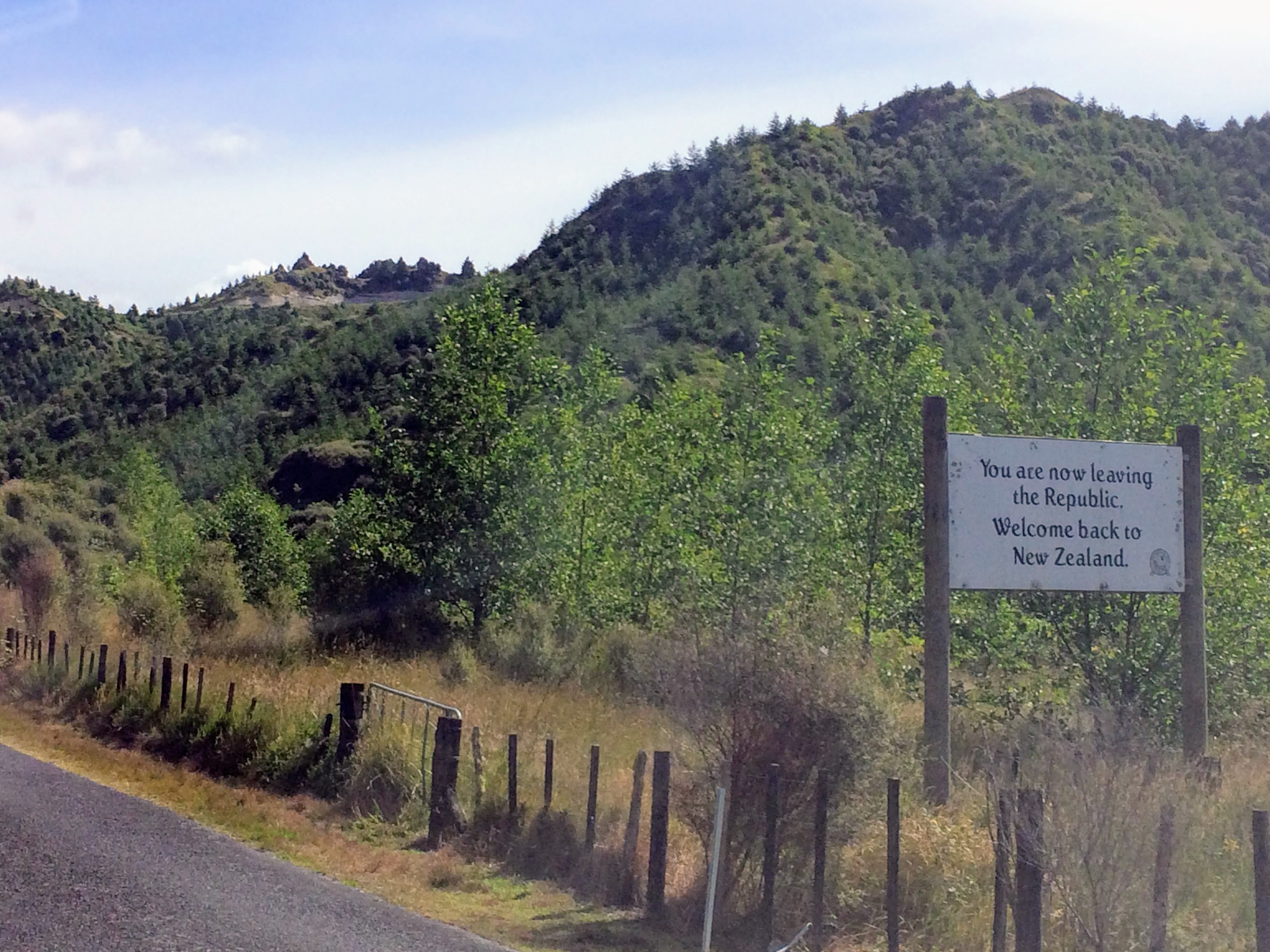 Whangamomona, a republic in NZ 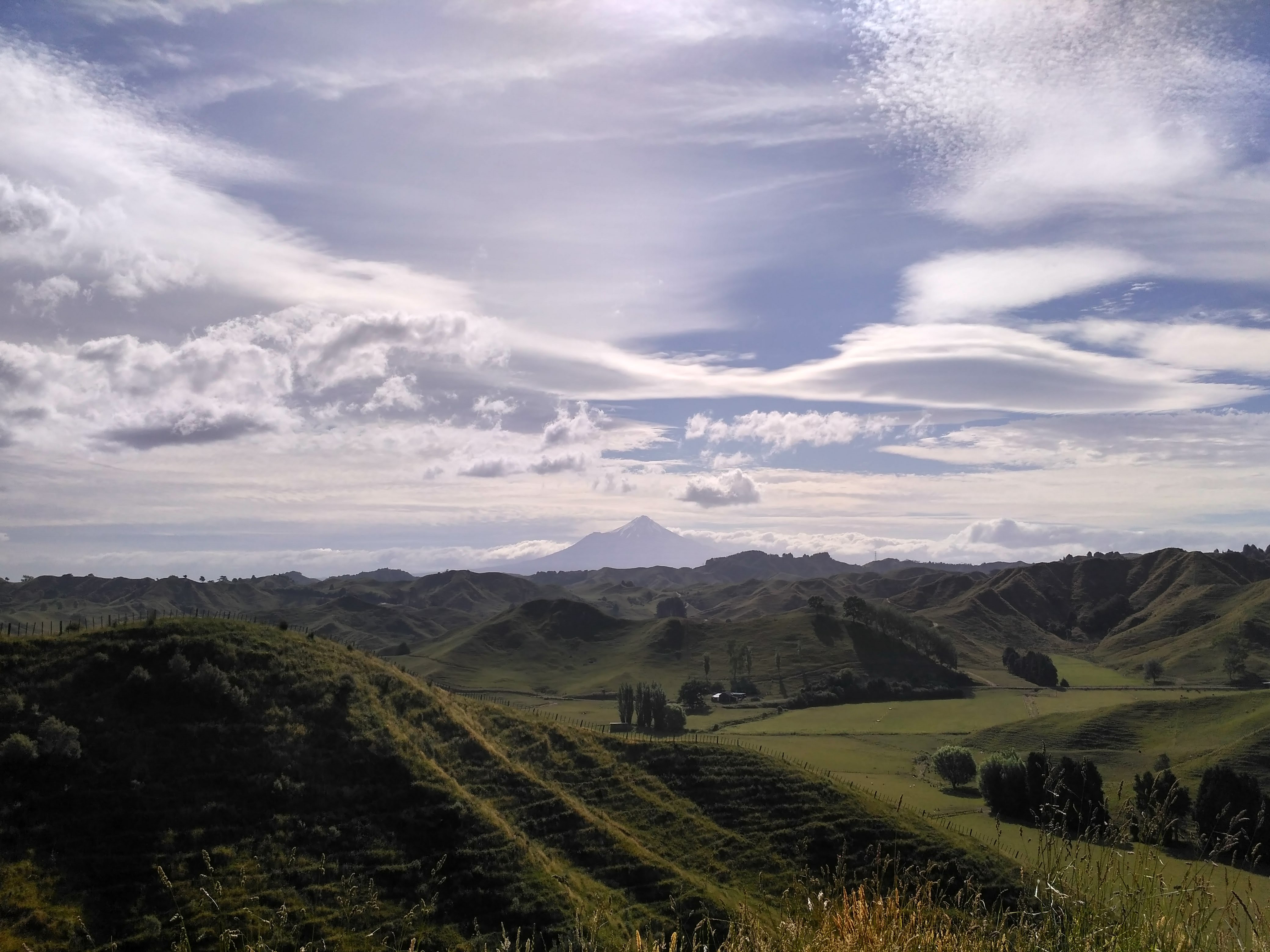 First glimpse of the Mount Taranaki

Beautiful volcano but quite unpredictable. To get closer, we did a 12-km hike with an elevation gain of 1000m. We stayed upthere a bit more than 2 hours to see clearly the summit. There was still a little bit of snow at the top, a-ma-zing. 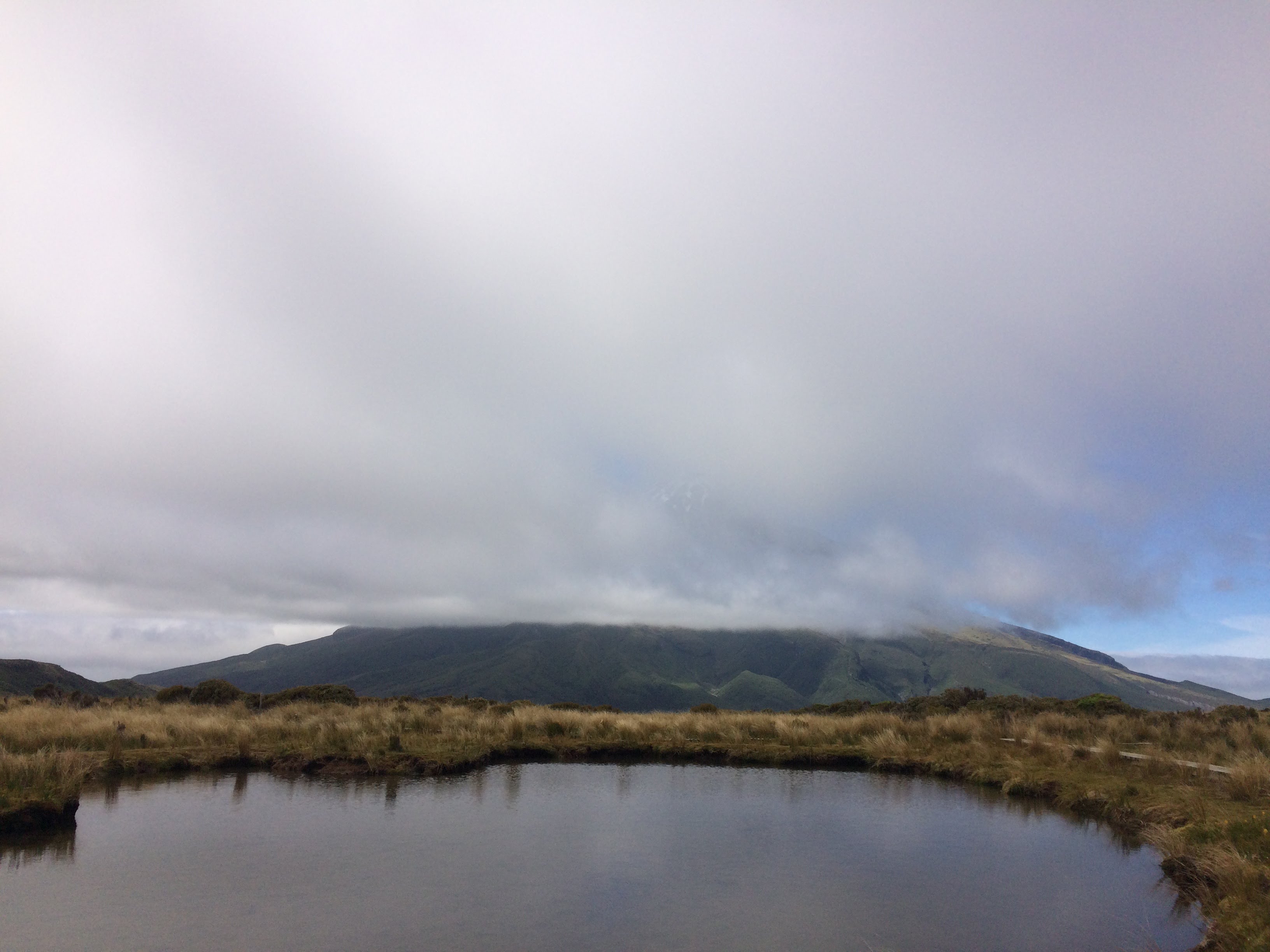 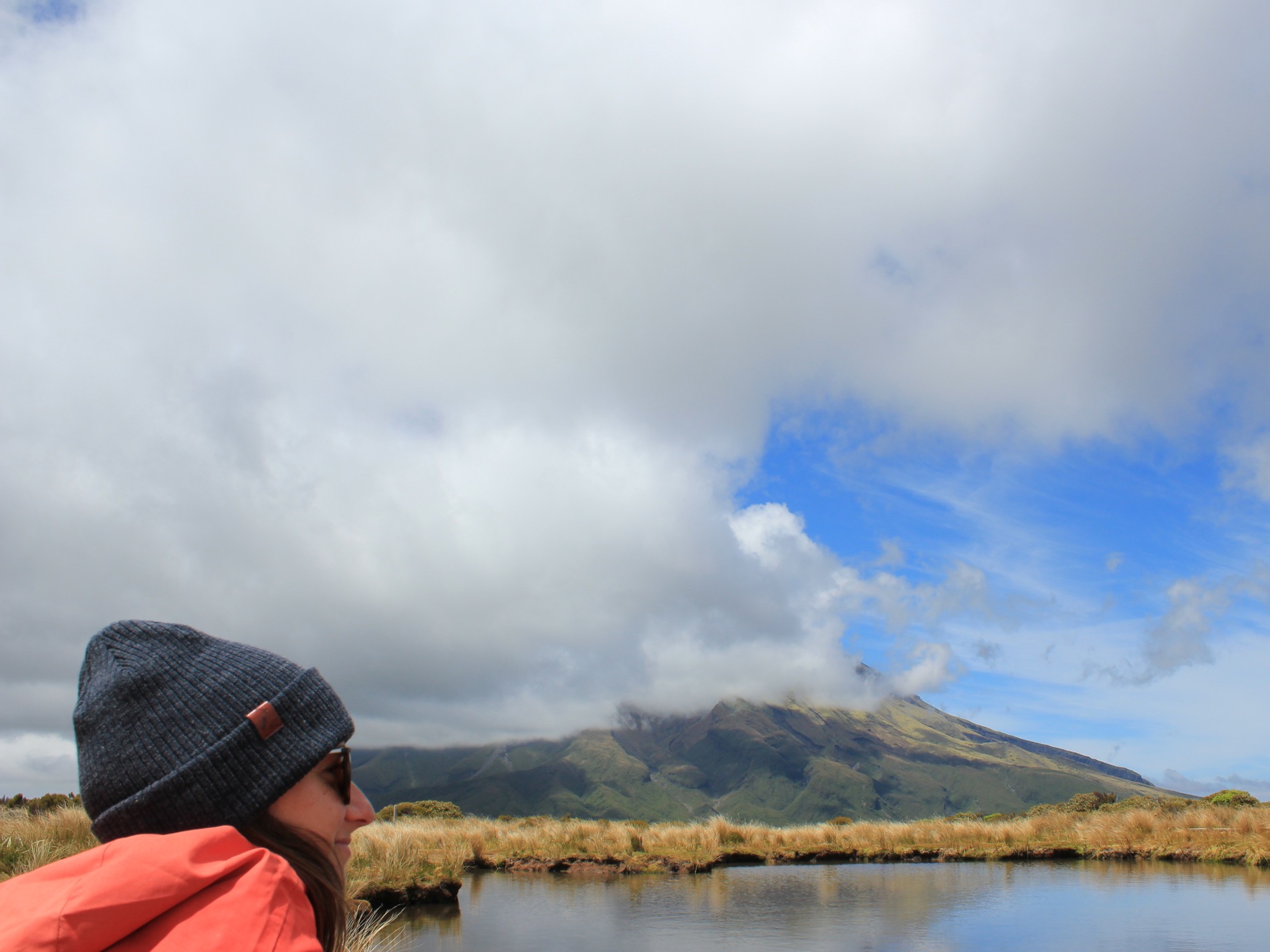 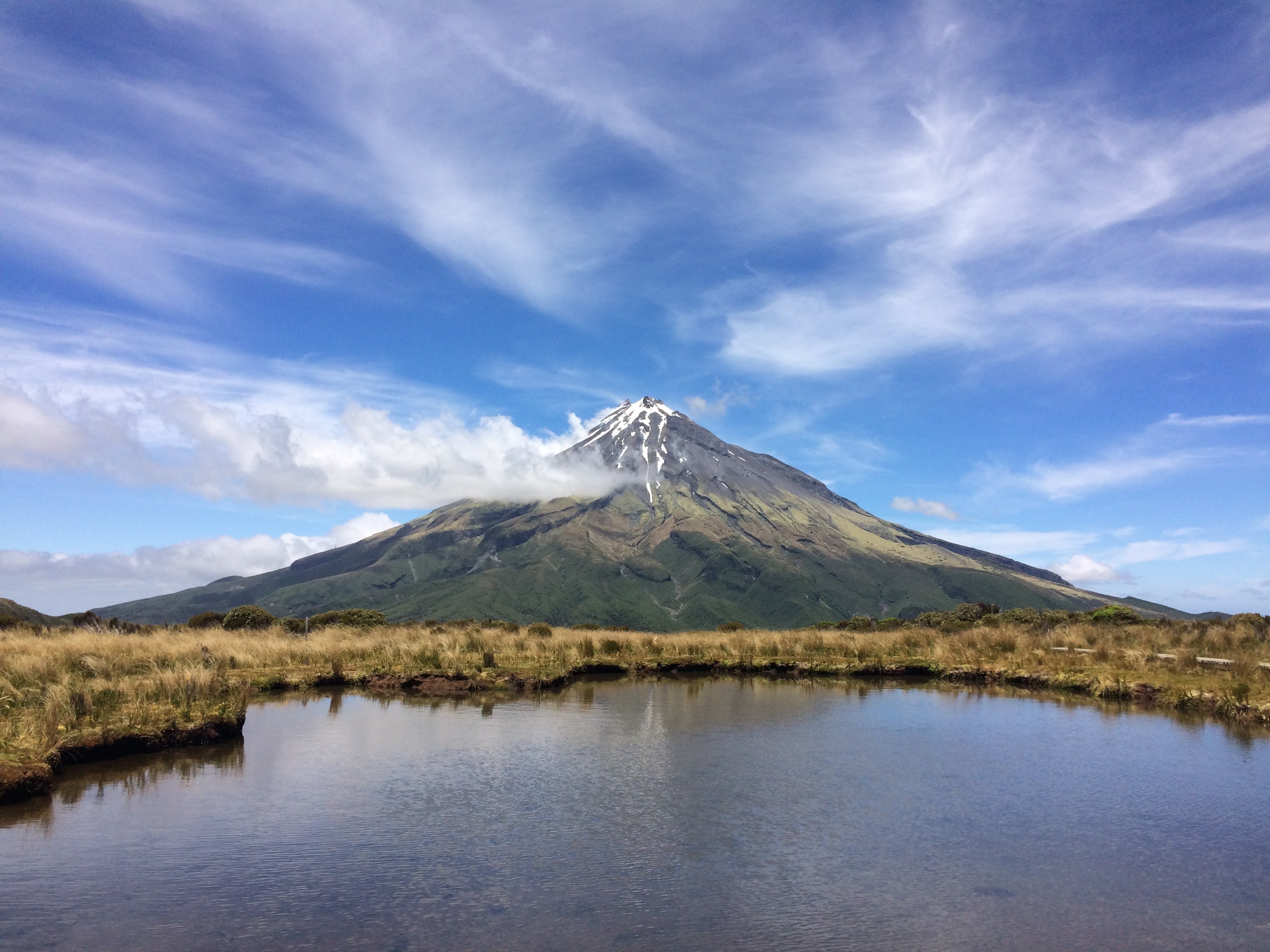 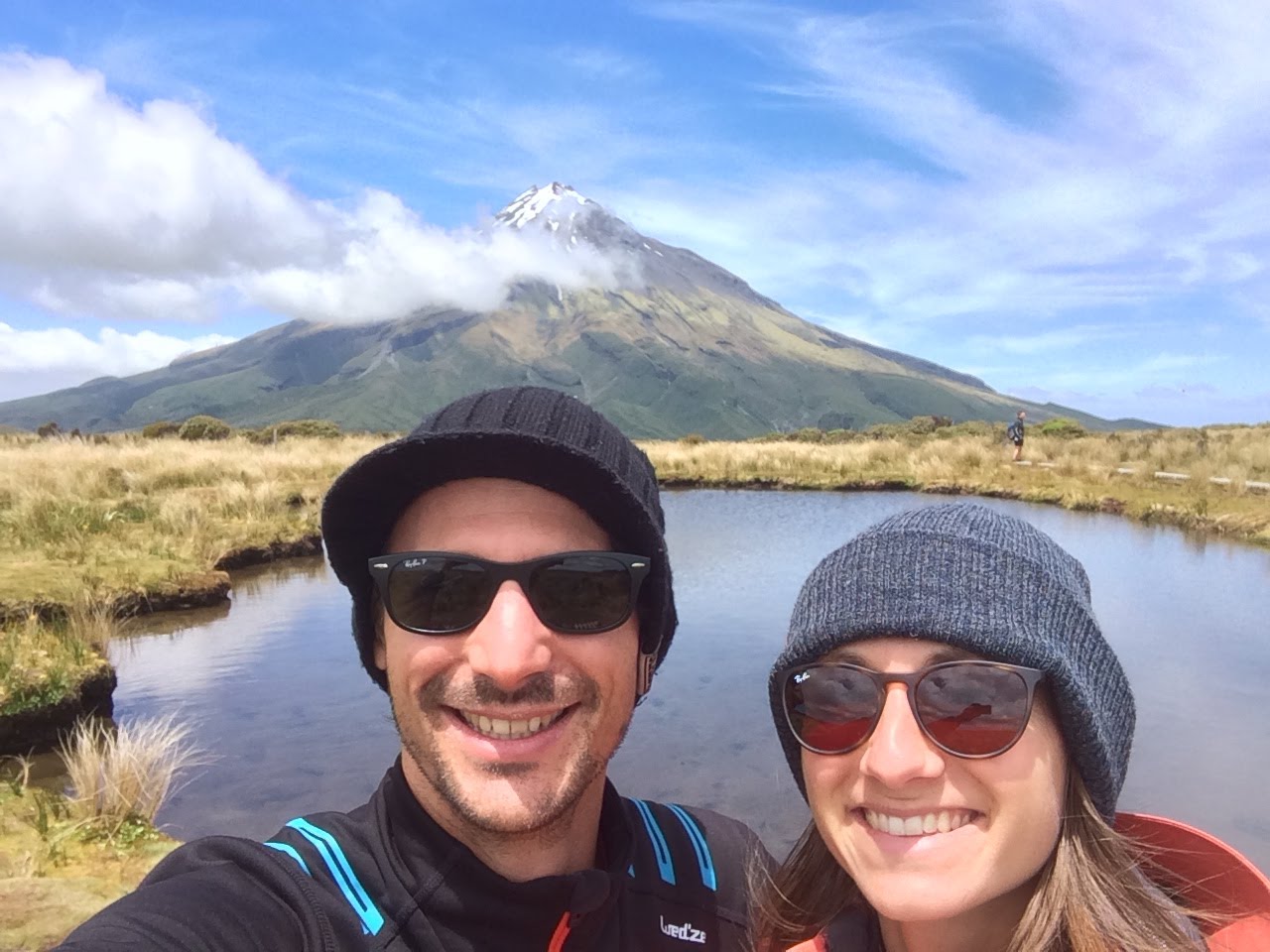 The Mount Taranaki is located a few kilometers away from New Plymouth, a very charming town close to the sea and full of cyclists. After our hike, we chilled there, on the beach and in the sea and in the evening there was a lights festival in the main park. We really enjoyed our time there. 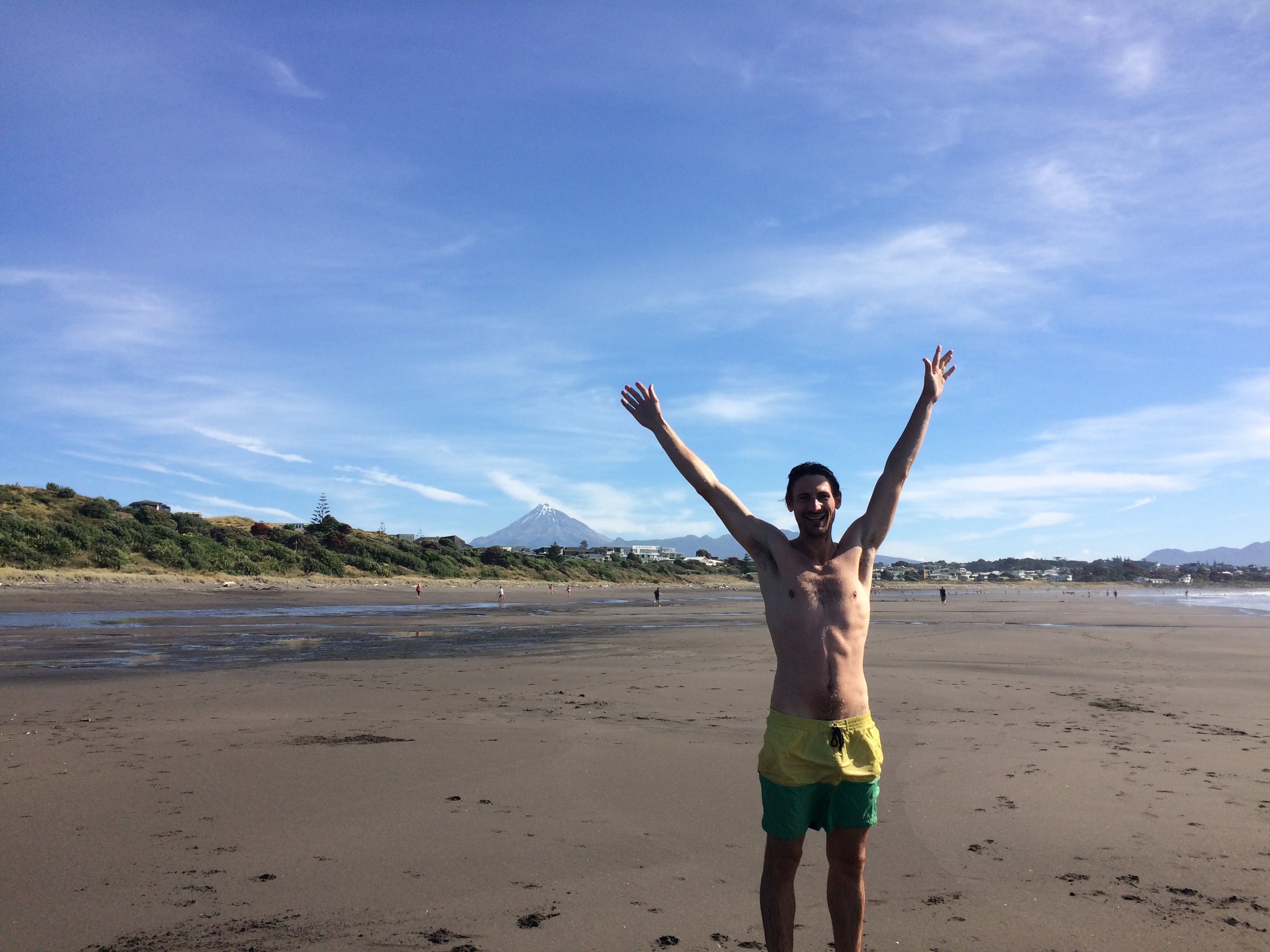 New Plymouth - nice view on the Mt Taranaki while swimming 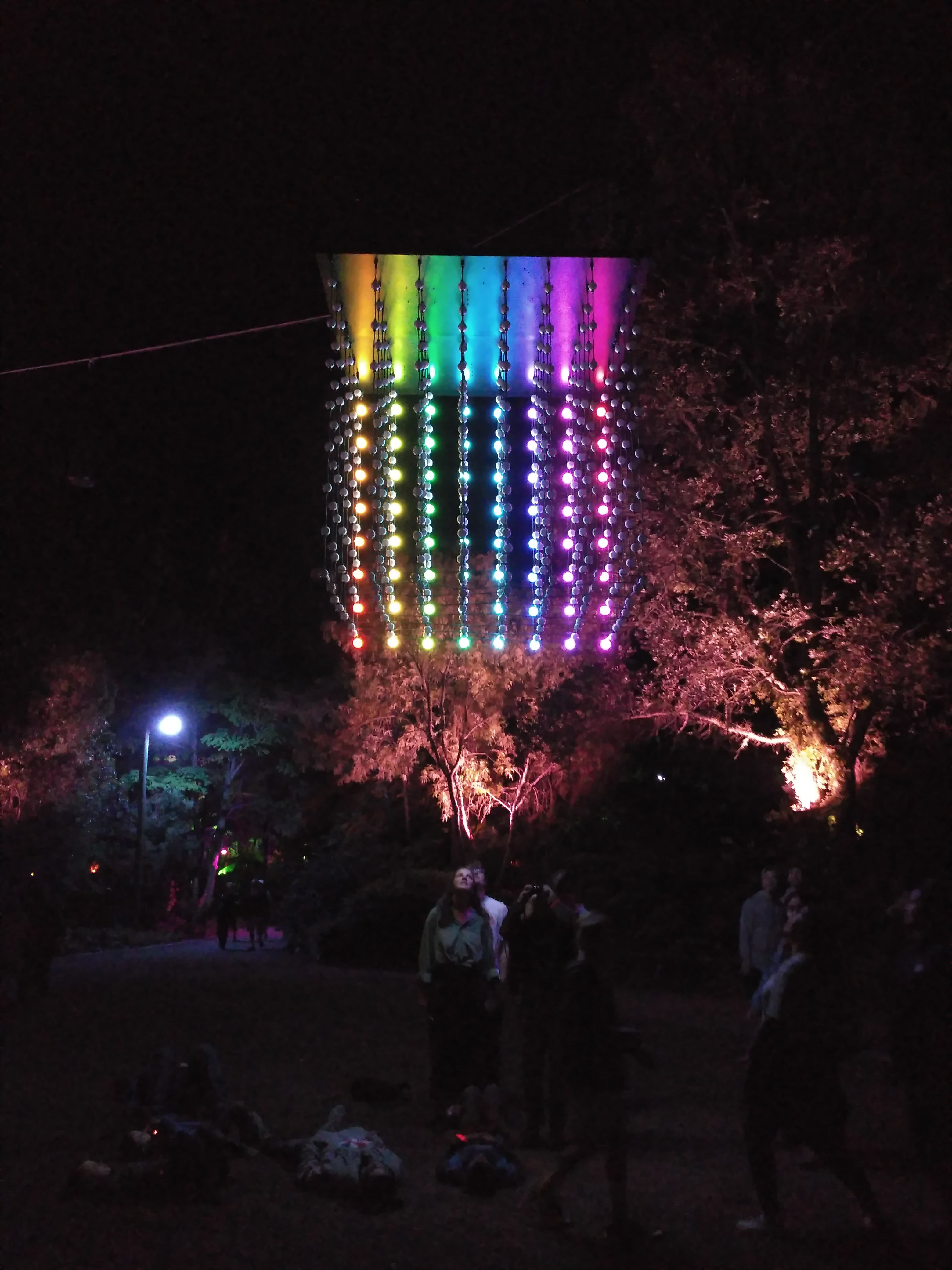 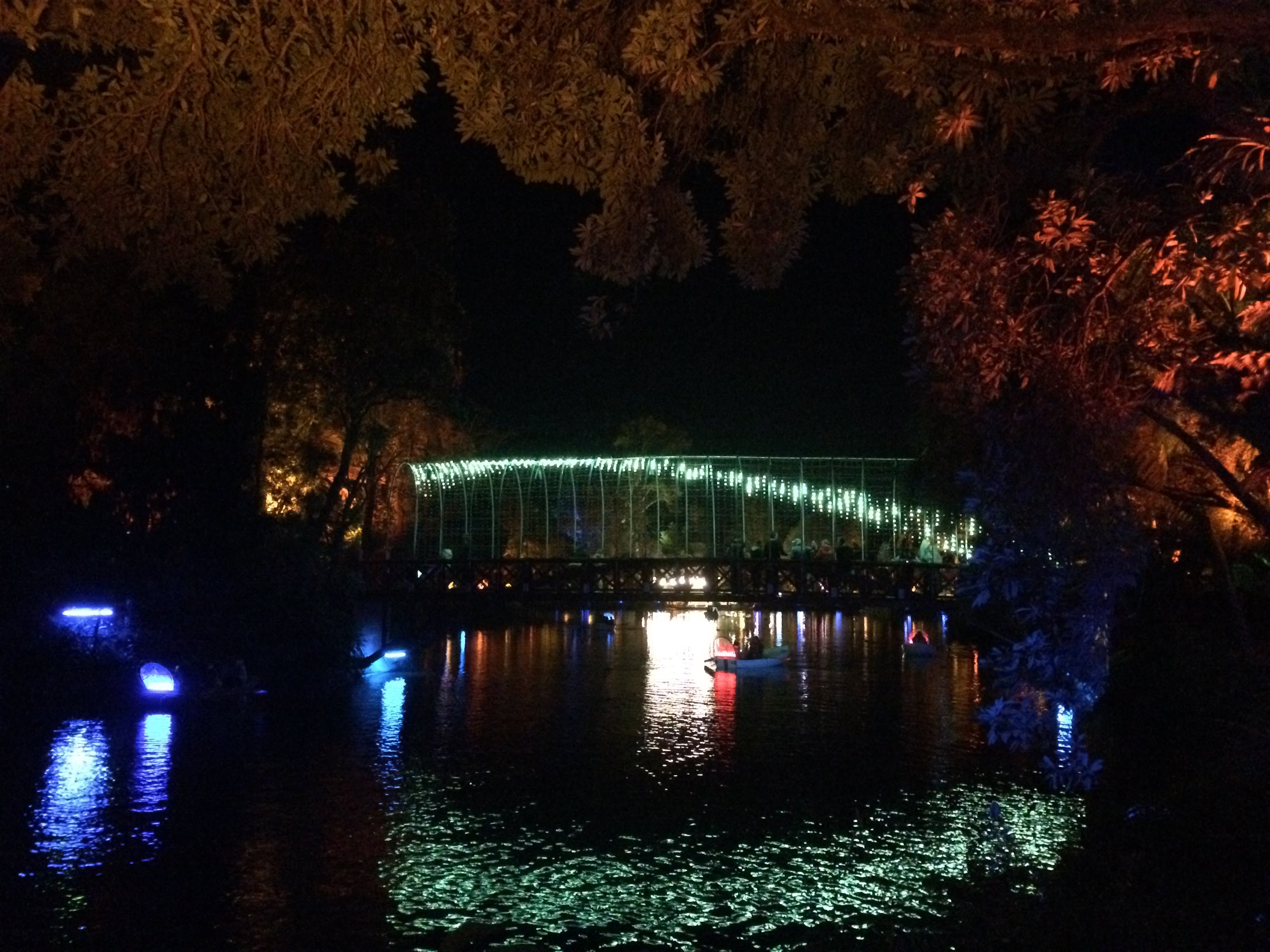 Festival of Lights in New Plymouth

We had a few days to go to Wellington so we followed the coast for a long time and could enjoy views of the Mount Taranaki all the way. 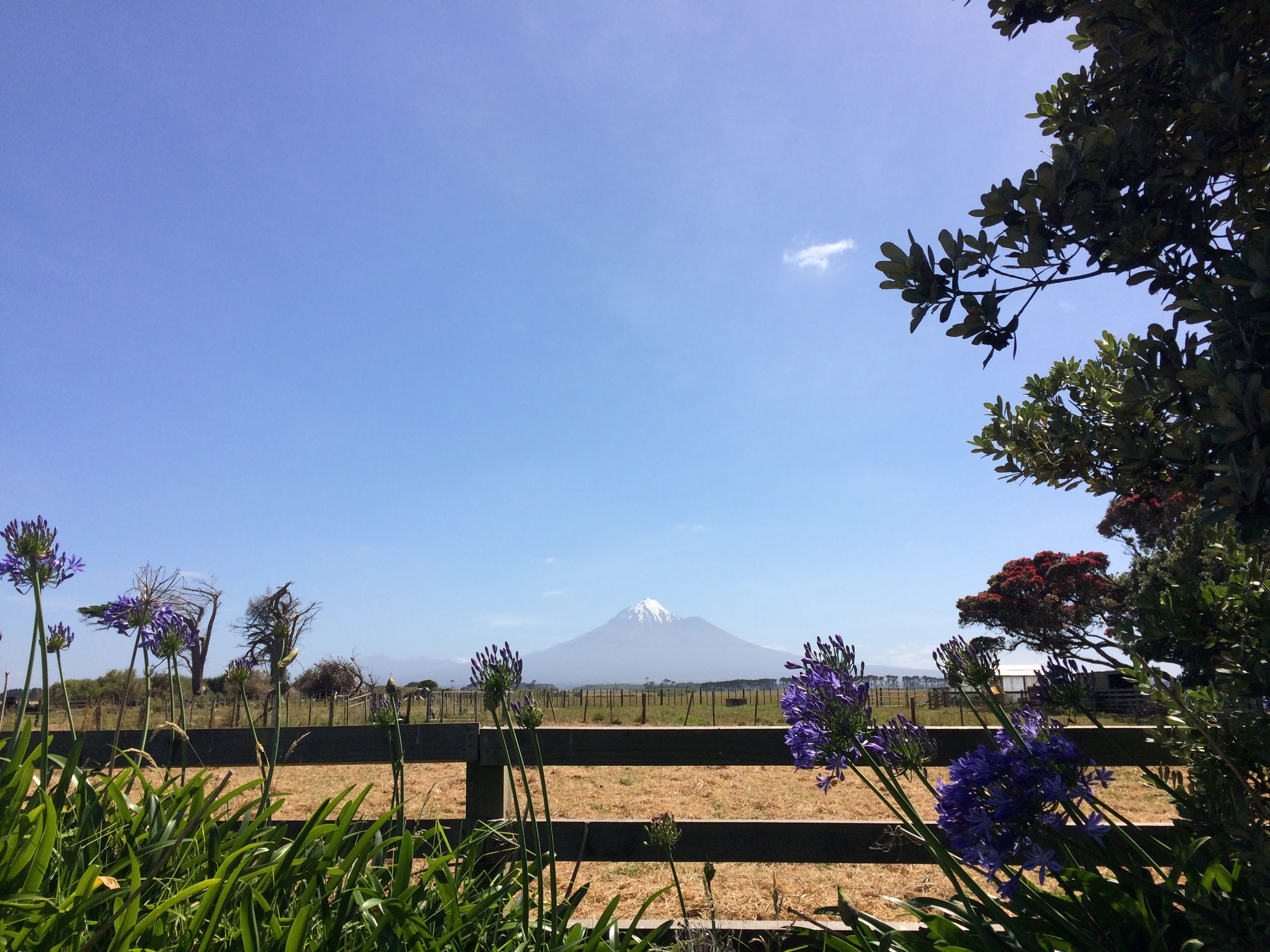 We can still see the Mt Taranaki

Then we stopped at Whanganui (same name as the river), town as charming as New Plymouth. We explored the city by foot, going to museums, parks, enjoying the victorian architecture and lively streets. 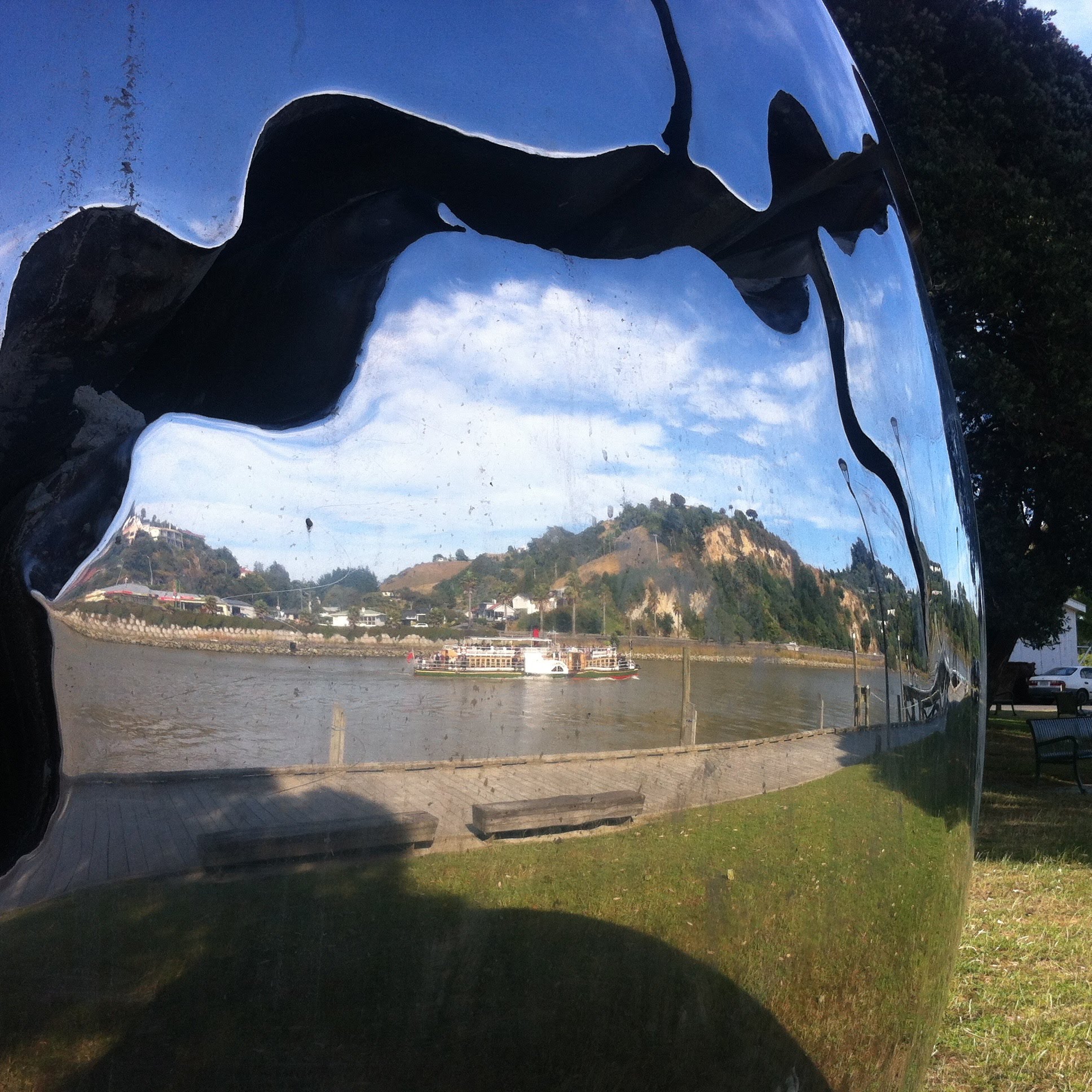 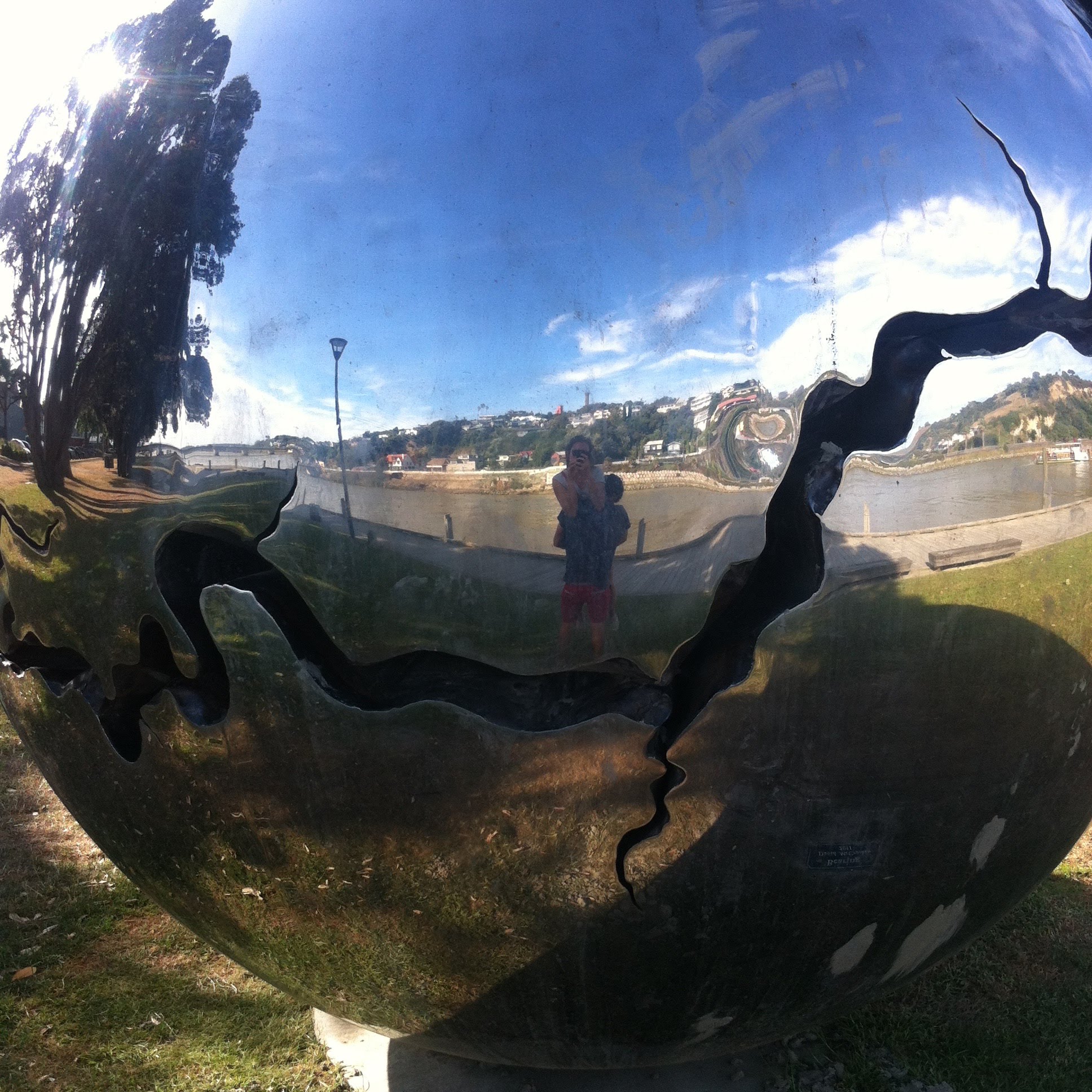 On the bank of the Whanganui river

We spent 2 days in Wellington. It was too short but the ferry won't wait for us and we may come back after our South island trip.

Te Papa museum - free and very well-known in NZ - is about the Maori and Pacific culture, NZ fauna and flora. The museum is huge and very interesting; even after spending 4 hours inside, we still had some things to see.

The front of the waka (canoe) at Te Papa museum

The city seems very active and clean. The young ones were diving in the harbour and we even saw a group of rays. The atmosphere, the inhabitants, the cyclists, shops and hills really reminded us of a mix between San Francisco and London. A lot smaller though ;) It's called the Windy City but I guess we were lucky again!

In the city center 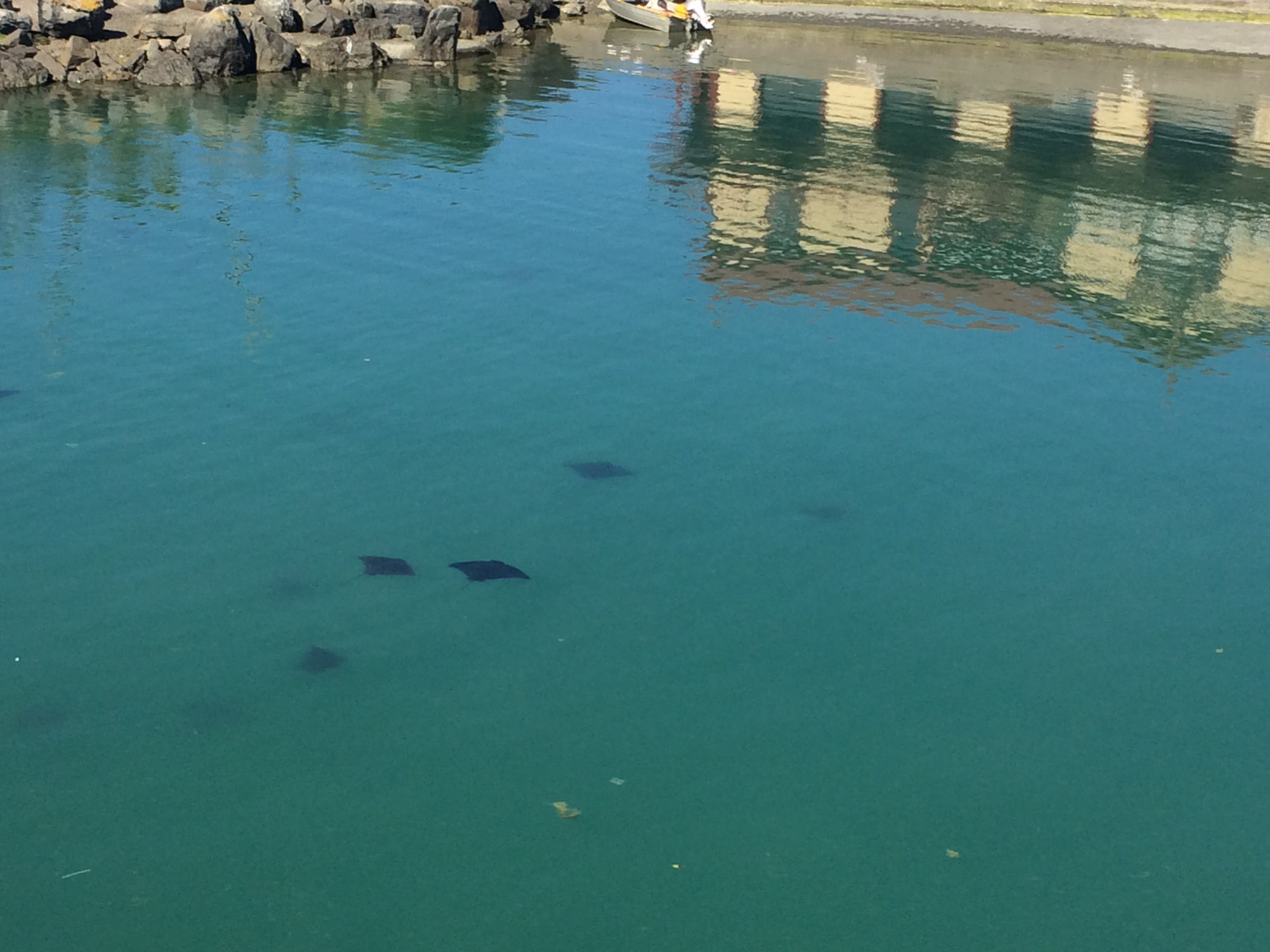 The surroundings are very nice, between sea and tropical forest, we discovered the real Rivendell (a place where a scene of the Lord of the Rings was filmed).

We wish you a wonderful end of the year! Lots of love,

Read our other cards 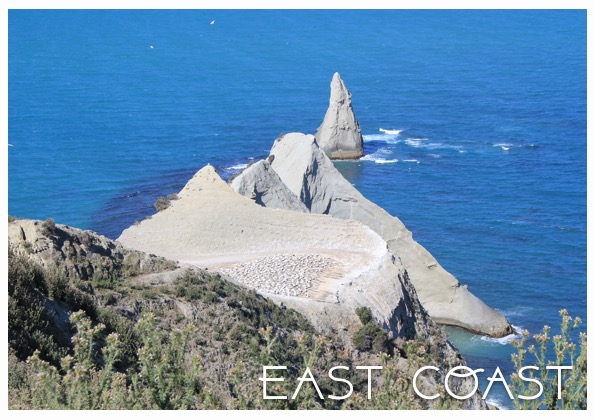